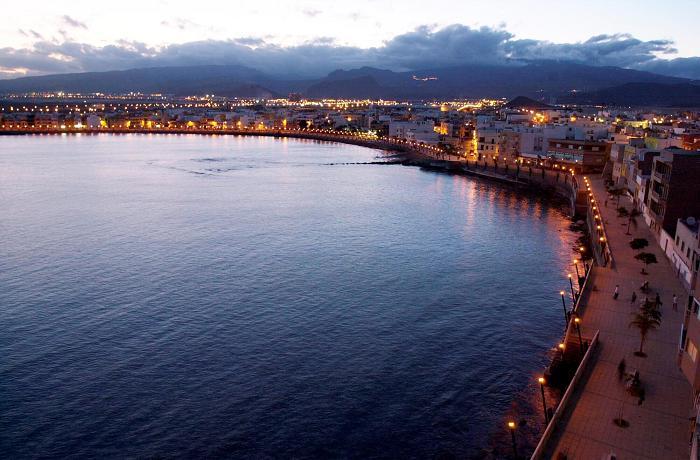 In the current Agüimes the legacy of the ancestors lives in harmony with modernity. Its tourist offer is linked to heritage, nature, traditional gastronomy and the products of the land, tradition and culture. Today Agüimes encloses in each corner an old story to tell and a future full of good omens. Industry, export agriculture and wind energy are significant elements of modern Agüimes.

Agüimes Old Town was founded in 1486, after the conquest of the archipelago by the Crown of Castile. It is one of the oldest Canary archipelago and those that best preserve the traditional style. It was the original nucleus of the municipality and, for a long time, the economic and population center. After five hundred years of post-conquest history and many more years of Aboriginal settlement, the façades have been restored, cobbled streets, improved street furniture and the placement of various sculptures. Walking through the Historical Center the visitor gleans insights into the history and the elements that have witnessed it. A very broad typological richness is revealed in the old town: façades, roofs, carpentry, traditional architectural and urban elements are the bases on which the heritage legacy of the Agüimes Historical Center is based.

The Historical Center of Agüimes has initiated the declaration file of Historical Set, category included in the concept of Cultural Interest.

Agüimes Historical Old Town’s Interpretation Center presents the heritage values, the history and the course of daily life of this centenary and dynamic population center.

It is located in the San Antón Square, in the very center of the Historic District, occupying a set of old buildings remodeled for this purpose, including the site of the now-defunct hermitage of San Antón Abad.

The tour through the different halls of the Center, offers visitors the possibility of knowing how the urban fabric in which it is immersed was configured over the centuries, serving as a guide for a better use of the cultural offer and leisure of the municipality.

This parochial temple of Neoclassical style houses images of artists such as Luján Pérez (the most important Canarian image maker), Martín de Andújar, Lorenzo de Campos and the Sevillana School among others. Inside there are a variety of styles: Gothic, Neoclassical and Baroque, the latter being the most decorative. On December 30, 1995, the image of San Sebastian marble, work of D. Luis Alemán Montull, is placed in the exterior niche of the frontis. The parish church of San Sebastián was declared a National Historic Artistic Monument in 1981.

Over our centuries the township of Agüimes was a fiefdom of the Episcopal Chamber. The Episcopal Palace bears testimony of that time. The first written reference to the use of this building as a Bishops’ Palace dates back to 1706. This building has been restored and today houses the prized Agüimes Historical Museum.

The Episcopal Palace, the house of the Episcopal Chamber, is declared an Asset of Cultural Interest, with the category of Monument, by Decree 285/1996 of November 22. In this building, both the access door and the stonework that frames are worthy of mention. Its stonework is noteworthy, the only quarry in this area of the island; the pitched roof, as well as the precious treatment of the wood.

This was an old warehouse converted into a municipal winery where wine and oil are made. In May 2003, the building is located on the southern access of Agüimes old town, on a hill with exceptional views over the Arinaga flatlands.

The construction responds to the island’s predominant popular typology. It is built with stone walls quarried locally and a flat wooden roof. The main body of the winery has two floors (ground floor and basement) with an area for preparing and storing grapes, the winery, laboratory, multipurpose room, room where the oil mill is located for the production of oil. The building also houses a restaurant and small shop selling local craftwork and gastronomic products. 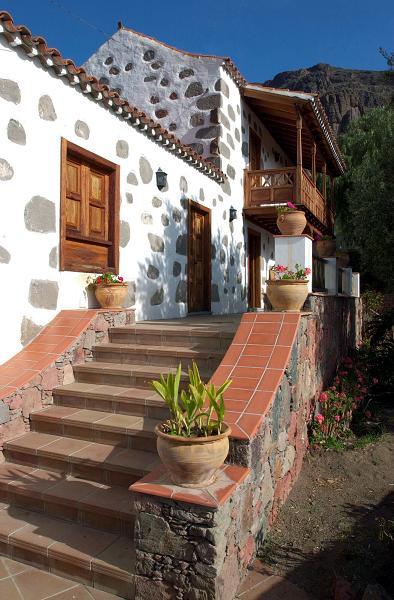 At the top of Agüimes township on a 650-meter-high ridge, we reach the Valley of Temisas, centered on San Miguel, Immaculate Heart of Jesus.

Temisas retains an architectonic unity well integrated in the landscape, encompassing a series of small concentrated hamlets. The house of Temisas is a clear exponent of the popular Canarian architecture, of great compositional simplicity, rectangular floors, walls of loads, covered with two waters. Households on the ground floor predominate, with some examples of two floors.

Temisas is the home of the San Miguel chapel, built in 1730, by the people under the guidance of a Dominican friar from Agüimes who was stationed there at that time. This same friar sculpted and gave to the hermitage the image of its patron San Miguel Archangel. 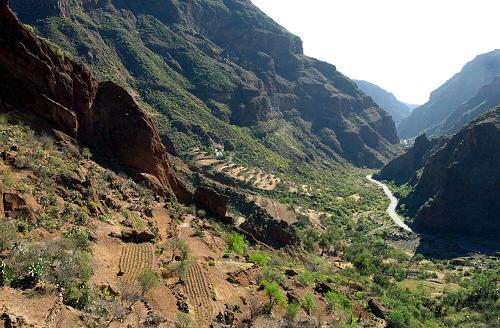 In 2001, the Guayadeque Site Museum was inaugurated, an interpretation and reception center for visitors to this unique ravine. The center aims to show the extraordinary environmental and heritage values that surround this valley.

The site has been excavated on the Guayadeque slopes, following the troglodyte tradition of its architecture. It offers a simulated journey through the remotest past, in which erosion and volcanic activity formed this landscape, up to its current use, through aboriginal occupation and subsequent colonization. 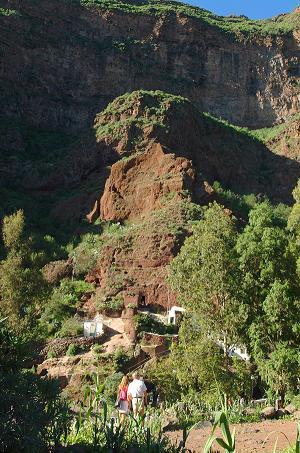 The exhibition in the Interpretation Center begins with the representation of the natural environment of Guayadeque. Then the aboriginal settlement itself is presented. The next aspect under study supposes a radical change of contents, since it shows the European way of life in the last quarter of the fifteenth century. The transformations and new practices introduced in the ravine following the European colonization are also presented. The museum contents conclude with a vision of the current uses and activities in Guayadeque, with special reference to those ethnographic values that still remain.

Los Hornos de Cal (Chalk Furnaces) located by the coast, on the Arinaga seafront, have been rehabilitated as a museum space giving rise to the Museum of the Lime of Risco Verde recreating a factory atmosphere. Varied information on artisan activity is exhibited, with a description of the process of obtaining lime from limestones located in the vicinity. The rehabilitation of this space also meant the creation of restaurant facilities, thus strengthening the tourist claim.

Located between Cabrón Beach and Arinaga Beach, Arinaga Lighthouse is one of the few samples of Canary lighthouse architecture from the late nineteenth century that remains intact, with an excellent location, and exquisite surroundings.

The building’s main interest is its historical origin, a project of the León y Castillo engineer using a classic eclectic style. Its role in the landscape of the municipal coastline is also noteworthy. Its location in an exposed area, with no other nearby buildings, gives it a unique character that is part of the image of this place. The building and its surroundings are located in the natural setting of the Mountain of Arinaga, and therefore protected by the Law of Territorial Planning and Natural Spaces of the Canary Islands. Inside, a Museum of the Sea is planned, with a restaurant.

May: Festivities of San José Obrero
“The Day of the Farm Hand and Shepherd”. The area’s faming and pastoral tradition around Cruce de Arinaga is commemorated on this day: display of traditional games and sports, sheep sheering and milking of goats and cows, making and tasting cheeses, popular sancocho (fish platter).
September: Festivities of the Virgen del Pino
“La Vará del pescao” A charming tour with folklore, music and fresh roasted sardines along the streets of the fishing village of Arinaga.
October: Festivities of Our Lady of the Rosary.
Festivals declared of National Tourist Interest
The “Delivery of Water and Gofio”: recalls the old custom of going to the mill to look for these fundamental elements of our gastronomy.
The “Encounter in the Old Town”: it is a day of get-together in which our customs, folklore and cookery are presented around the town’s historic center.