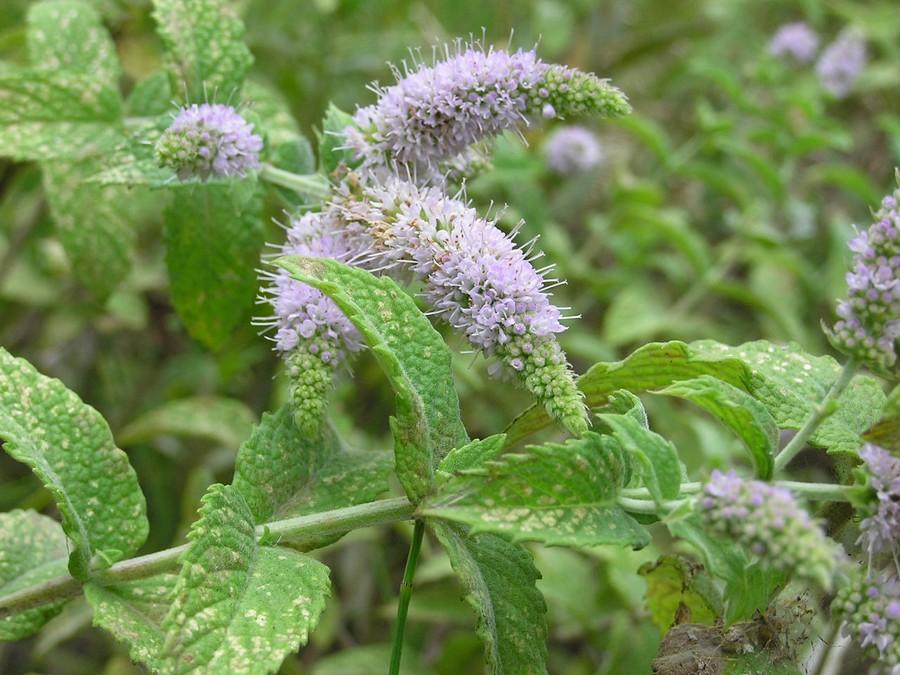 This is the first in a series of walks provided in collaboration with GLOBAL and ecological group Turcón-Ecologistas en Acción. Described by Álvaro Monzón, one of the leading members of this group, the walks include excursions through protected natural landscapes of the island of Gran Canaria.

Álvaro Monzón is author of the book Descubriendo Gran Canaria (Discovering Gran Canaria), which exceeded all initial sales expectations. With Global as one of the main sponsors, 4000 copies have been published.

Route through the Barranco de Azuaje

Barranco de Azuaje – Azuaje Ravine – is the geographical and administrative border of the boroughs of Firgas and Moya. Like many of the island’s ravines, it starts in the peaks area and comes out at the sea, changing name at various parts along its course and giving way to small tributaries. The ravine starts at an altitude of almost 1620 m, at a pass known as Degollada de Las Palomas (in the upper part of the borough of Valleseco), where it’s known as Barranco de Crespo. After joining onto other ravines it becomes Barranco de La Virgen, then Barranco de Guadalupe when it approaches the town of Firgas, and finally takes the name Barranco de Azuaje when it comes out at the sea next to the hamlet of San Andrés.

Azuaje always has water in it, particularly in some sections, giving it a wealth of biological features and making it well worth a visit. 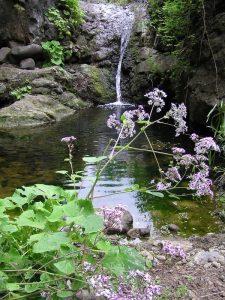 The name of Azuaje: a Genoese ravine

Barranco de Azuaje is a Special Natural Reserve and is therefore highly protected. Although the name of the ravine changes throughout its course, the most prevalent name is Azuaje, which comes from the surname of Francisco de Azuaje, a leading townsman involved in the sugar industry in Barranco de Guadalupe.

In the 15th century the Genoese came to the Canary Islands for economic reasons in a bid to expand their markets. The first of these mentioned in the history of Gran Canaria was Damián de Azuaje, owner of an estate and a sugar mill. Thirty two Genoese traders became established in the route between Gran Canaria and Cádiz, mainly because of their mastery of trading and extensive influence. In the first half of the 16th century they were responsible for 53% of exports from the island.

Numerous paths cross over and zigzag along the ravine. This first walk has been chosen for its history. In 1835, Firgas separated from the borough of Arucas. According to the chronicles, the first public work by the newly fledged council of Firgas was the construction of a stone pathway connecting it to the neighbouring town of Moya, to the west.

The walk starts from the centre of Firgas. Head SW along the street next to the bus station, towards Las Madres, until you come to a street called Calle 18 de Julio, where you’ll see the local police station. After five minutes you’ll find a sign on your right for “La Capellanía”, at the start of the path. Leave the sealed road and go down a steep concrete path past a few houses until you come to a water channel known as Subacequia de San Juan.

As you walk on the dirt path, you’ll see “the house of seven windows” in the distance; this is where you need to head. The clear, well kept path soon comes to a fork, where you need to go down to the left. Walk past the house with seven windows until you come to a lower area where there’s a group of livestock. Go left again, looking out for a rusty metal pipe that runs across the path as a landmark.

From here you’ll walk along a slippery section in the shade alongside high rocks, where you’ll see some blackberry plants. The sides are dotted with St John’s wort and at the top you’ll see a bright green tree, an old barbusano. After that you’ll come to some fig and almond trees planted to mark out the descent for tourists on the route from the old accommodation house in Firgas to the spa. 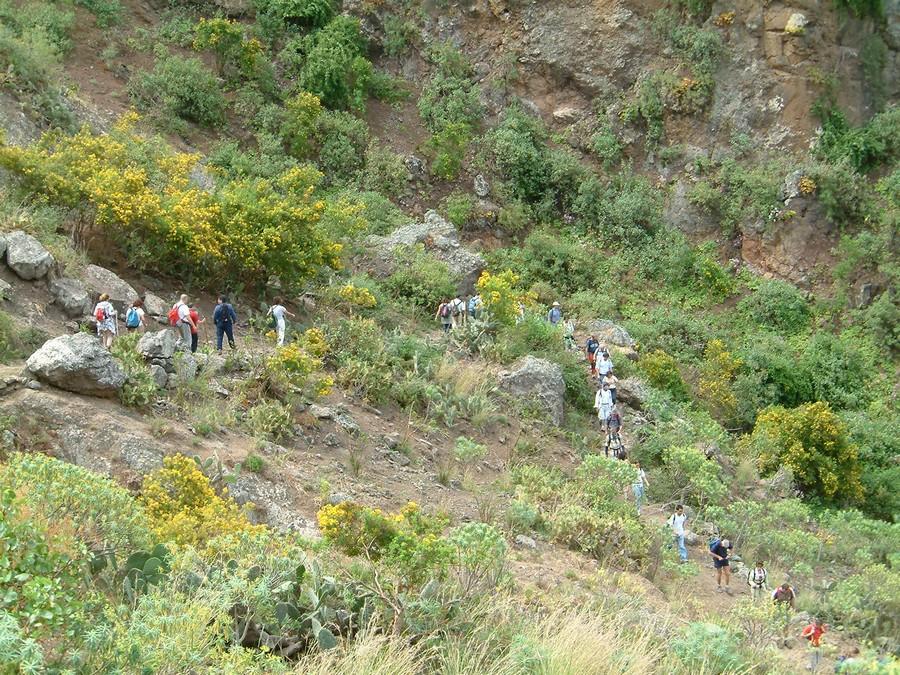 The path is in perfect condition as it heads down among Canary tree bindweed, bugloss, fountain bush and sorrel, coming out at the bed of Azuaje ravine, where you’ll see a small stream. Go up a path on the left and you’ll come to a recreation area with picnic tables. Here you’ll see water coming down the bed of the ravine and a few small waterfalls, as well as some Canary willows.

This first section is about 3.5 km and is a comfortable 45-minute walk.

After a well-earned rest among the leafy vegetation, enjoying the sound of the birds and the water racing down the ravine, it’s time to head off again. Follow the bed of the ravine towards the coast, passing the ruins of the old Azuaje Spa. The water for the spa came from Fuente Santa (Holy Spring), which is now closed off behind walls to the left. At the front of one wall there’s a small overflow where you can see traces of the iron-bearing water on the rocks.

Continue heading N-NE, walking alongside the stream that gives this section a fresh, pleasant setting. As well as Canary willows, you’ll see some edible plants that were once commonly used for medicinal purposes. These include Canary Islands tea, the pink-flowered water mint, and horsetail, about which tradition says “the best is found where you can’t see the sea”. These plants are on your right as you walk along an easy dirt path. When you reach a lime kiln, the path ends, taking you past a waterfall and a large cave on the right. This is a tricky part of the walk and you need to be careful not to go off the main path.

This path takes you down the bed of the ravine, which has no water in this section. The walk ends up at the San Andrés football field. The total distance is roughly 6 km and it takes about two and a half hours.