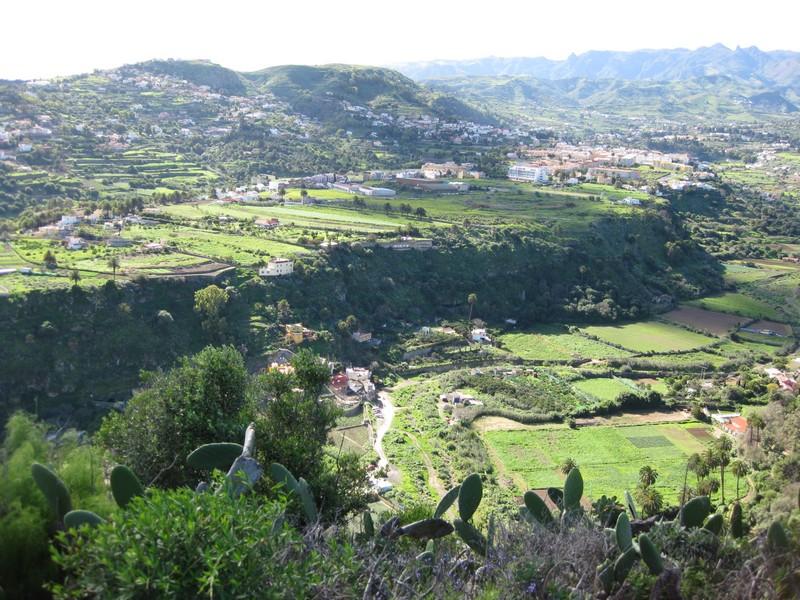 This walk through the Barranco del Guiniguada ravine was chosen because even though it’s one of Gran Canaria’s largest ravines, it remains unknown for many hikers. The aim of the description is to encourage nature lovers and everyone who wants to learn about and discover mostly untouched environments to go on this walk, which is suitable for anyone who’s used to hiking.

Guiniguada, “running waters”, is one of the largest ravine basins in Gran Canaria. It has an area of 72 km2 and starts in the centre of the island (Cruz de Tejeda), heading NE and extending down to Las Palmas de Gran Canaria.

In this ravine visitors will see a wide range of landscapes, including volcanoes, dams, palm groves and the large banana plantations on the lower section within the borough of Las Palmas de Gran Canaria.

The ravine was one of the main sites of pre-Hispanic settlement in the island. Several dwelling areas of the earliest inhabitants can be found along the edges of the ravine and its tributaries.

In geomorphological terms, the middle section of Valle del Guiniguada has a more gentle relief of extensive areas with an even surface suitable for crops and human settlement. A series of slopes and ridges divided by small tributaries created the uneven surface of the ravine bed through a process of erosion.

Before you start this walk it’s a good idea to take a quiet stroll through the town centre of Santa Brígida. The architecture, with its Neo-Classical influences, has some unique aspects for visitors to enjoy. The casino, the town hall and the church and its sculptures decorate the square, from where you’ll have a spectacular view of the rural setting of the town. The old town of the Villa de Santa Brígida is about to be named a Cultural Interest Site by the Canary Islands Government.

To start the walk, go to a street by the name of Calle Muro, near the church, which follows the first part of the pilgrim’s path known as “Pa’l Pino”. At the end of the street take the descent on the left and after walking down on a concrete surface, go left again to reach the bottom of a small ravine.

This is the Santa Brígida ravine, an extension of the Mireles ravine, which starts in the foothills of San Mateo. If you crossed over and continued straight ahead, you’d be on the path to Teror and Barranco de Alonso, but this walk goes in a different direction.

At the bottom of the ravine, head right following a path along the middle, through the vegetation (fennel, sorrel and large Canary spurge plants). Further on you’ll come to a fork where you’ll need to go left, keeping to the bed of the ravine and passing in front of a barn.

Walking along the ravine bed, you’ll come to a group of trees (mastic and carob) and a stand of common Canary spurge and then you’ll go past Eufemiano Fuentes’ mansion, built across the ravine like a bridge. The house was designed in 1954 by Valencian architect Rafael Massanet, who took advantage of the overhang between the Santa Brígida and the Alonso ravines. The mansion is now surrounded by leafy trees that set off the architectural achievement.

You’ve now come to the convergence with the Barranco de Alonso ravine on your left. In five minutes the ravine comes out in a larger ravine, Barranco de la Angostura. Close by you’ll see a hamlet by the name of Arenal and some houses in Las Meleguinas, as well as the main road that joins this area to Santa Brígida.

You’ll have taken 25 to 30 minutes to reach this point, after completing the part that requires a little more experience in orientation, but from here on it’ll be much easier to follow the suggested route.

Now you need to keep to the dirt track that runs alongside the ravine bed, heading down the ravine. While you enjoy the scenery, take a look at the unique features of the Guiniguada ravine: the flora and fauna and the pre-Hispanic caves along the walls on the left.

The Cultural Interest Site of Cuevas de la Angostura is a unique complex of man-made caves spread out over a number of level areas, dug into the tuff and connected by paths and steps. Used as dwellings, these pre-Hispanic caves retain archaeological features such as granaries and cup and ring marks.

A little further on you’ll come to the football field in La Angostura. Walk on the asphalt as far as the car park then take the dirt track on the right as far as a fork. Go left, towards an old communal washing place. The washing facilities in the area have been restored by Proyecto Guiniguada (The Guiniguada Project), an initiative of the Cabildo de Gran Canaria. In the shade of some eucalyptus trees you’ll find some tables and benches made out of the typical wood used for this project. The recycled timber comes from eastern European countries where wooden railway sleepers were replaced with concrete structures.

Continuing along this path you’ll come to the end of the ridge on the Camino de Los Olivos track and at the school (on your right) you’ll see the mouth of the ravine, where it descends from Santa Brígida.

Continue along the ravine bed to another picnic spot and the second washing place. Then you’ll go under a bridge on the road to La Calzada, where you’ll find more architecture related to water, in the form of water channels running along the higher part of the ravine basin.

When the track comes to an end, follow the ravine bed on a narrow path that goes through some enormous specimens of common Canary spurge. These are the largest examples of this plant on the walk and some of them are taller than a person. They’re well worth a photo.

Further on you’ll come to a third communal washing facility (this one hasn’t been restored) near some stables and caves. Keep going along the ravine bed. By this stage you’ll have left the borough of Santa Brígida behind and entered Las Palmas de Gran Canaria at the hamlet of La Calzada.

Walking along the track you’ll come to a dirt area used as a car park, just below another picturesque water channel. Go straight on and then head left, coming out on a street that leads to the GC-310 road (Tafira-San Lorenzo) and on to the botanic gardens – Jardín Canario – on the left. Walk along the side of the road a few metres. You’re now in El Dragonal and from Santa Brígida to the Jardín Canario you’ll have taken about two and a half hours.

After a highly recommended visit to the Jardín Canario, continue along the road, passing the headquarters of the Guiniguada Project.

You’ll need to walk exactly 1,100 m along the asphalt from El Dragonal to the corner where the Maipez Bar-Restaurant is. Leave the road at this point and take a track on the right, among some odd rock forms in the shape of blocks poking out from the Holocene lava flow from the Monte Lentiscal volcano, whose eruptions covered 4 km of this part of the ravine.

After passing a farm with livestock, continue along the ridge of Lomo de Maipez, from where you’ll have extensive views to the right of the vertical rock walls in the Guiniguada ravine.

Along the sides you’ll see some houses and farms where the track forks. Either branch will take you to the next point of reference: a small group of pines and banana plantations when you come back to the ravine bed. This area is known as “Fuente de Morales” and is near the point where you go under the large viaducts of the Las Palmas de Gran Canaria ring road.

This spot is a bit untidy because of work going on in the area. The houses on the left are in Lomo de la Cruz, very near the suburb of La Paterna. You’ll see some water tunnels almost buried under the work.

The end of the walk is about another hour and a half away, down the ravine bed on a stony, dirt path. Make sure you don’t take any of the side paths that lead to banana plantations and other crops.

As you approach the Las Palmas de Gran Canaria-Tafira motorway, where the ravine is flanked by concrete walls, leave the ravine bed and go up to a sealed street next to a dairy. Go out of the ravine on the left hand side.

You’re now in Pambaso, where you’ll see some of the Guiniguada Project offices and the animal shelter, as well as the Guiniguada primary school. You can choose to go towards the Tafira motorway and head down to the Pérez Galdós theatre or go to a street called Calle Bernardino Correa Viera, which leads to Avenida Primero de Mayo and Alameda de Colón.

For more info, contact the photographer and author of these descriptions at: alvaromonzon@gmail.com

The full name of the Botanic Garden is Jardín Botánico Canario Viera y Clavijo, in honour of Viera y Clavijo, an 18th century Canary Islands naturalist. The garden is in Tafira Alta and is a “must-see” for any visitor.

The Botanic Garden was established in 1952 by Swedish botanist Eric Sventenius (1910-1973), with the assistance of several collaborators, including Jaime O’Shanahan and Fernando Navarro.

Its functions are to provide educational facilities and raise public awareness about Canary Islands flora, and to collect, grow and study these unique plants in a natural museum spread over 27 hectares. The Jardín Canario is Spain’s largest garden and is home to relict species no longer found in the wild.
The garden has a seed bank, library and specialist archive. Its scientists are pioneers in growing threatened species in vitro.

A visit to the Jardín Canario starts out in Plaza de Matías Vega next to an exuberant palm grove and takes in the Jardín de Las Islas (Garden of the Islands), which showcases plants from other islands, a wooden bridge over a narrow section of the Guiniguada ravine, la Fuente de los Sabios (the Fountain of the Wise), the laurel forest, Sventenius’ waterfall and Plaza de los Nenúfares (Water Lily Square).