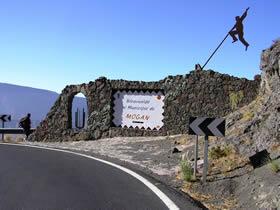 Veneguera, and in particular its beach, have become a cause in recent years for ecologists and naturalists who want to keep the natural area free of mass tourism and uncontrolled building. Its attractions range from agrological to archaeological and include unique botanic specimens.

Anyone who wants to discover the beach at Veneguera has to travel eight km over a dirt road from the village of Veneguera. The walk proposed here is more extensive and takes in the higher part of Veneguera ravine and its valley, offering wide views over the area.

GLOBAL reserves the right to change this information

PROFILE OF THE WALK

In 1954 a dirt track was opened up between the town of Mogán and San Nicolás de Tolentino. Since then it has fallen into disuse but remains in reasonably good condition and includes signposts recently installed by the Mogán council.

The walk starts at Degollada de Tasarte, on the left of the large sign for the borough of Mogán, where you’ll find iron sculptures of a cactus spurge and a local form of transport known as “the shepherd’s leap”. Head south, next to a square stone marker, zigzagging downwards towards a section of disused track. Continue straight on the path, walking on grey volcanic gravel. The clear path curves its way through plants such as sage, cneorum and bugloss. After a narrow section you’ll come to a ridge known as Lomo del Camino, with views of Las Pernadas mountains on the left. Head down a long, winding, slippery path beside a rocky ridge then go left and head down the left hand side of the ridge, finally turning right to go down a small ravine.

Go up a slight rise on the other side as far as a rocky outcrop known as Morrete del Balo, which you’ll reach after about 20 minutes of walking. Go down to the left, cross over a small ravine and continue on the path on the left hand side as you look down the ravine. Go through a pass and you’ll start to see the bottom of El Balo ravine and a clump of Canary Island palm trees mixed with pines and other trees.

Go past a carob tree to some ruined houses in La Cogolla. Keep heading downwards on the dirt track. On your right, behind a mimosa tree, you’ll see a well preserved bread oven built out of dry stone, of high ethnographic value.

As you head downwards, you’ll see some houses in a better state of repair. After a few curves on the dirt track you’ll come to the descent of Llanos del Gusano. Walk across this area next to a large rock formation on the right and follow the wooden posts to a ridge known as El Riego and head towards a holding pool.

During this easy, flat section you’ll come across the first fruit trees near La Solana. Cross a small ravine, where you’ll see a bit of water and some willows, then continue straight on in search of a white storage building surrounded by enormous spurge plants. You’ll see a street sign for Calle Real del Mar and the number 25. Go up to a flat sealed area and head towards the streets on the left, to the church of Nuestra Señora de Fátima (Our Lady of Fatima) and the village square in Veneguera.

After a break in the village square, cross the road on the crossing and then take a small path that leads to a recreational area where the local council has set up an ethnographic display. Head to the lower part and go out of this area between two giant spurges. When you come to a street, go right and walk past the Almacicos restaurant.

At the next junction go down to the left towards a bus stop (half way point). Keep heading down to another junction where a sign indicates the beach to the right.

A dry stone marker indicates another path, which is option A: this way you can go straight to Casas de la Huerta Vieja, but as the purpose of this walk is to see the giant flame tree, this option is not described here.

Option B is to keep going down the sealed path between the crops on both sides of the ravine. Where the road veers to the right at some eucalyptus trees, you’ll see a small ravine known as Barranco Huerta Vieja on your left.

Option C is the return walk to the giant flame tree. Keep going down the track, which soon becomes dirt, and in 700 m you’ll see El Sao and a well, known as pozo de San Antonio (Saint Anthony’s well), next to a large avocado tree. Continue heading downwards and you’ll come to the flame tree, behind a holding pool. This magnificent specimen is fenced off, but to one side you’ll find the entrance to a property where laurel trees provide some welcome shade. The altitude here is 200 m and the place is known as Las Goteras. You’ll have walked nearly 7 km by this stage.

Go back 1400 m to Huerta Vieja ravine and the sealed path to start the walk referred to as option B.

On the right (if you’re coming from the flame tree), when you reach the eucalyptus trees, cross the ravine and walk along a concrete water channel. Head up towards the houses at the top of the ridge. When you reach a stop gate in the water channel and a path, step off the water channel and you’ll see some stone steps heading upwards. Go up via a rocky outcrop towards the first two houses, which have a number 6 on them. Go between the houses and behind them you’ll find a wood oven on your right.

Go up another rocky ridge, keeping an eye out for a white house with streaks of grey. You’ll see another flame tree and a pomegranate tree and then you’ll walk under a papaya tree, with the house on your right, where options A, B and C meet up.

At an altitude of 251 m the steepest section of the walk begins, on a bridle path full of history and legend, the scene of hard work in the past. The hard work was done by the mule drivers who drove their mules up the path to load them with the products of the bountiful land in Veneguera. Every corner of the path must hold a story of the people who travelled to and from Mogán after taking part in a variety of local festivities and processions. At one stage the authorities set up checkpoints to stop the spread of disease between towns. The council made adult males care for and maintain the paths, although some of the wealthier residents found a way out by paying 2 to 3.5 pesetas to avoid this task (1).

You can also go up at a point a bit further on. You’ll see a clump of reeds with no clear way through them, but if you can manage it, start the ascent by following some markings in white paint. The walk goes up between aloe, sticky restharrow, pitch trefoil and candle plants. It continues up a rocky ridge and then after a zigzag it enters a gully known as Hoya de la Salvia. Head towards two lone palm trees and then up to the ridge of Lomo de Las Tosquillas, where the path narrows and the views are spectacular. You’ll see the high mountains of Inagua, Hornos and Tauro in the distance. The village of Veneguera lies at your feet and the whole valley is planted with fruit trees.

The walk goes past some wooden posts and then along the S-SW face of the ridge. After a few zigzags it comes to an area of volcanic rock, where the path has been dug out. It goes along a flat section heading towards Degollada de Cruz de Mogán in the distance. You can also see La Fortaleza and its enormous cross.
After an ascent of 45 minutes you’ll come to a pass with a view of the town of Mogán, at an altitude of 436 m.

The two options here are to take the path to the crest or go down the ridge of Lomo de la Quinta towards the centre of Mogán.

If you stand at the base of the cross and look towards Mogán, you’ll see the way down: a narrow path that becomes even narrower on the descent and is crumbling away because of its sandy surface. After a long winding stretch, keep an eye out for a house with a tiled roof and a water tank on a rooftop terrace. You’ll come to a threshing floor and see that the house has a number 7 on the door and is called Tamoganife.

From here, go down a track that will take you across the Mogán ravine. Go up on the right to the main road, where you’ll come out at a pensioners’ club. Go left on the narrow footpath. The church is on your right and a little further on you’ll come to a thick eucalyptus tree, where you’ll find the bus stops, a phone box and several bars and restaurants where you can have a drink after the walk.

This walk in Veneguera could have been given a different name, but it was called the Mango Walk because of the large amount of this exotic fruit you can see along the way. Mogán may well have been the first place mangoes were planted, in the early 19th century, after they were introduced from Cuba by emigrant Matías Sarmiento. This conclusion was reached after consulting the 18th century natural history dictionary by Viera y Clavijo (Diccionario de Historia Natural), which doesn’t mention the presence of these fruit trees in the Canary Islands. The information points to Matías Sarmiento sending both money and produce home to Mogán.

The mango arrived from Cuba, from the Mangifera indica tree, one of the largest fruit crops in tropical countries. Mangoes have been grown in India since time immemorial. Kalidasa, a famous Indian poet, sang its praises. Alexander the Great liked the taste of this fruit, as did Chinese traveller and scholar Xuanzang. Mogul emperor Akbar planted more than 100,000 mango trees in Darbhanga, India. In India alone there are more than 1,000 varieties and it’s the national fruit. Other countries where mangoes are grown include Brazil, Ecuador, Israel, South Africa, Ivory Coast, Mexico, Puerto Rico, Peru, and countries in the Caribbean.

“Mangas” are first generation hybrids, the result of grafting using Mangifera indica as rootstock. This project, an initiative of Los Moriscos Experimental Centre, which belongs to savings bank Caja Insular de Ahorros, was supervised for many years by Dr Malo, from the University of Florida. Thanks to this project, mangoes became are mainly grown in the Mogán valley, as a result of the excellent growing conditions: quality water, gentle climate and well drained soil

You’ll see mango plantations throughout this walk. The queen variety of the mango is Tommy Atkins, and of the manga, the Keitt and Kent
The rough skin is inedible, although doctors have prescribed it to help cure certain cancers and in some parts of Gran Canaria, water from boiled mango skins is used as a gargle and to heal skin ulcers. The fruit contains a flat, oval stone in the centre. The stone is flatter in mangas than in mangoes. To test whether the fruit is ripe, it should feel soft with a gentle squeeze. Both mangoes and mangas have a high content of vitamins B1, B2 and C, as well as calcium and phosphorus.

“The most spectacular flame tree (Delonix regia) of the Canary Islands grows in Veneguera. All its needs are met: water, good drainage, constant sun, space, and the shelter provided by the massive slopes surrounding it. In August this flame tree bursts into flower.”