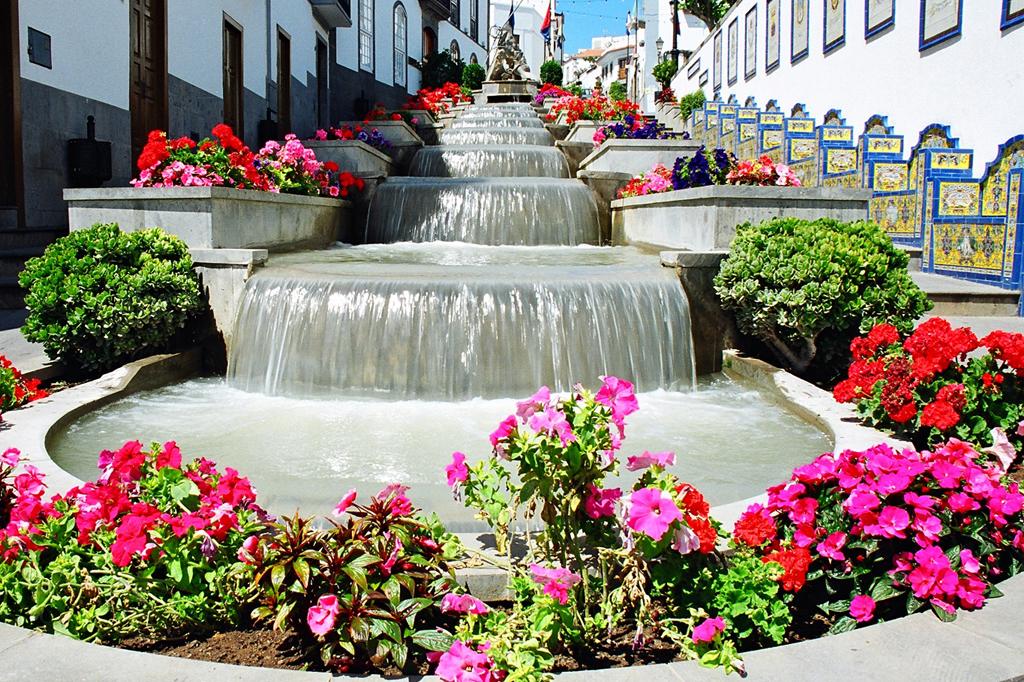 In Firgas we can discover wonderful natural landscapes to walk on foot enjoying the landscape or explore its history,touring the buildings and monuments in the old town.

A visit to Firgasshould include a hike through the Azuaje Protected Nature Reserve. The Azuaje ravine is inside the Doramas Rural Park. In 1987 it was declared a natural park and,in 1994, reclassified as a special natural reserve. It covers 61.1 hectares with no residents. Within this reserve we can enjoy one of the few remaining redoubts of Laurisilva in Gran Canaria, as well as a series of endemic species, some in danger of extinction, as is the case of the Rejalgadera. 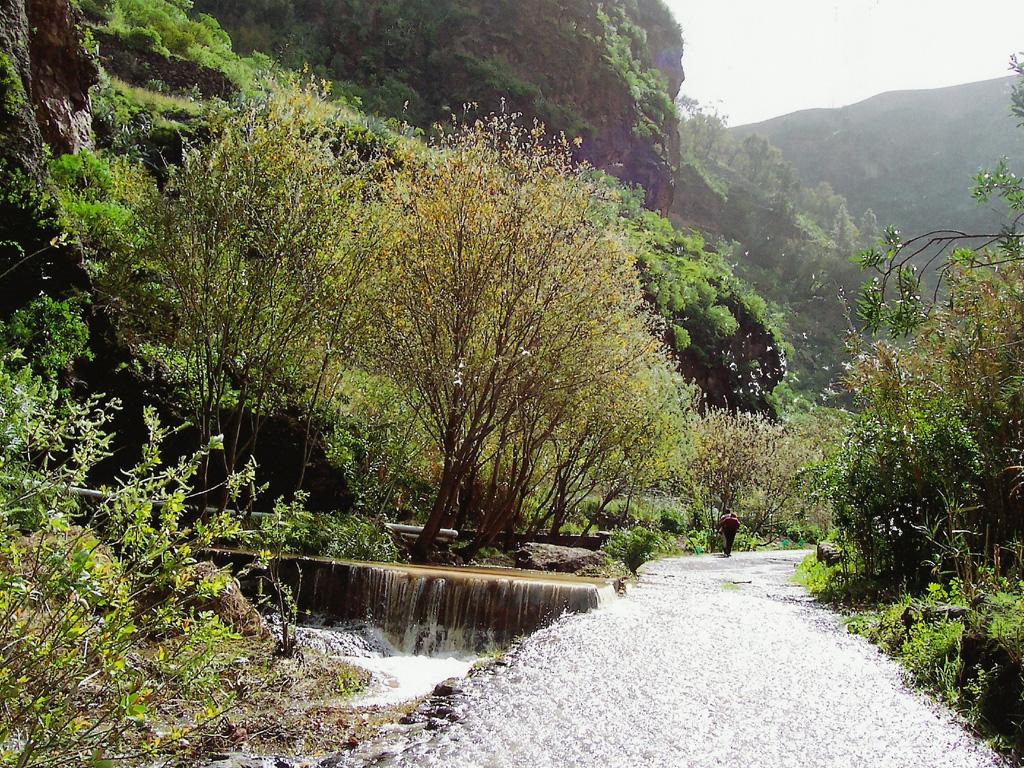 This ravine has a year-round water channel and the steep wallsmake it the deepest ravine in the north, with a striking V-shaped profile.

Furthermore, the Mountain of Firgas and the Peak of Osorio form part of the nature that surrounds this township, with panoramic views of great distance (La Isleta, Bay of Las Palmas and all the capital and the north ofthe island), in addition to offeringpristine reserves of native flora. The peak of Osorio has been declared of scenic interest in its slope of Teror and was repopulated a few years ago with the endemic Laurisilva.

On the road to Las Madres, in the area of San Antón, we find terraces that hold tanks full of water, known as berreras, where cress grows, the main ingredient of our most popular dish: watercress stew. Its cultivation was introduced in Firgasaround the 1920s and was originally cultivated in the ravine channels, as in the one in Las Madres, Guadalupe and Azuaje. Currently, you can find watercress plantations in the Azuaje ravine.

The Paseo de Gran Canaria and the Paseo de Canarias are located in the heart of the urban area and in what used to be the main street. They are pedestrian walkways with a gentle slope that has been used to build a beautiful waterfall of 30 meters long, in stone masonry, and topped with a beautiful monument, a source that represents the traditional richness in water.

The building of the Cultural Center is probably the most representativeintown. Formerly a hotel or inn, it was built in 1870 to accommodate users who came to the Azuaje baths. Subsequently, the building housed the headquarters of the City Council and the Public School. At present, within its walls are the Municipal Library, an Exhibition Hall and an Assembly Hall. 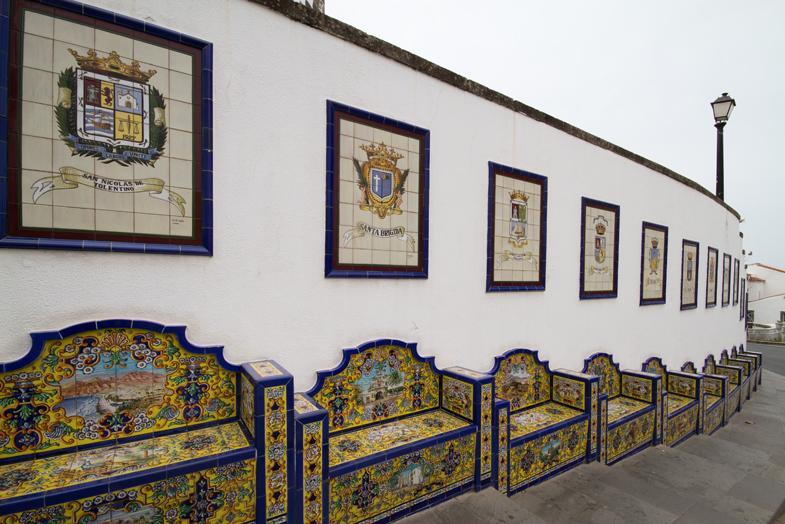 The Plaza de San Roque comprises the epicenter of the Villa since time immemorial. In her the Abandonment of the old canaries arose and in its lot the Hispanic Firgas was based. In it is located the monument to one of the most venerated saints in Firgas, San Juan de Ortega, first patron of the town. From this square you can see one of the most beautiful views of the North of Gran Canaria, and on clear days, you can see the islands of Tenerife and Fuerteventura. The current church of San Roque, which had its opening with total autonomy in 1845, and is built on the ruins of what was the first hermitage of San Juan Ortega, dating from 1502 and adjacent to a Dominican convent and disappeared. From what was the first hermitage, the façade currently persists, without the bell tower and the main door.

The main Firgas Town Hall building is a Neo-Canary style house built in the 1940s. Among its materials, the blue stone from the famous quarries of the lower part of town stands out and Canary pine in the construction of its magnificent balconies.

In October 2009 a new emblematic work was inaugurated for the municipality of Firgas, the Recovery of the Old Royal Canal as it passes through the San Roque Square. It was opened on one side, and some stone-washed stoneworkwasadded.Thesesculptural forms harken back to the women’s hands washing clothes, in remembrance to all the washerwomen who toiled in this very channel.

The Firgas Water Mill, also known as Molino del Conde, is located on the edge of the road that leads from Firgas to Valleseco. This building and annexes, consisting of the mill itself and the old grain store, the toasting oven and the miller’s house are located on the ditch of the Heredad de Aguas de Arucas y Firgas, taking advantage of this form the action of water togrind the grain by stone.Built in 1512, it operated continuously for more than 400 years, until in 1959 it had to be abandoned, due to a great drought, when there was not enough water to reach the mill through the ditch.Currently restored for the visitor, it is one of the town’s most beloved tourist attractions.

In the month of August, Firgas celebrates the festivity of its patron saint San Roque, festivities in which the Traída del Palois noteworthy, the purpose of which is to celebrate the carrying of a wooden post and flag raising to honor the patron San Roque. Afterwards, the pole is processed through the streets of the township amid the hubbub and the music of the charanga. Another act is the pilgrimage-offering in which each neighborhood and the pilgrims in general, build their carts that fill with typical and offerings that are left at the feet of the patron saint to help the less fortunate.