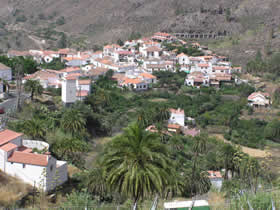 If you do this walk along the ravine of Barranco de Santa Lucía at the start of the year, you’re guaranteed to have a good display of water. The walk is also a rediscovery of an old bridle path that once joined Fataga and Santa Lucía via Los Sitios, crossing the lowest foothills of Amurga.

Several pathways link Fataga to the surrounding mountain peaks and villages, although the passing of time, lack of use and erosion have damaged many of them.

Long ago there were no roads in the area and the settlements in the inland and peak areas of Gran Canaria were essential for communications. Pack animals loaded with the produce of the land in Fataga used to go up the pathway known as Camino de Los Sitios for trade in Santa Lucía and other places. This pathway may even have been in use as early as the 16th century(1). In more recent times, the locals of Los Sitios recall how they used to go up this path on Sundays to buy bread in Fataga.

In some sections the path has retained its delightful cobbled surface, and the old stonework is still visible in the walls and the basic support structures. The path is well kept and it’s up to those who use it to keep it that way.

The walk starts with a visit to the centre of Fataga, to the alleys and the square that was once the location of large threshing floor for cereals. From the centre you need to walk about 400 m (7 minutes) up the main road towards Tunte..

As you go past a tower and the exit sign for Fataga, you’ll come across a retaining wall on the right of the ascending path, where you leave the sealed road. A bit further on you’ll find the entrance to a path on the right, with a eucalyptus tree and a rubbish container nearby, as an alternative way up. Both routes take you to a concrete path. From here you go up to a group of houses and a large holding pool. Go up the concrete path to house number 7, where you’ll find the entrance to the bridle path on the right.

Walk alongside the metal fence protecting the holding pool. The wooden posts for the power lines can also be used as a guide.

The path takes some wide zigzags before it reaches a crest, where you can enjoy the sweeping views of the Fataga ravine and the town with its palm grove and the mountains opposite, such as Colorada Alta and Manzanilla.

The path turns right and continues on a gentle rise until it reaches an abandoned water distribution channel and a place known as Degollada de Los Sitios, at an altitude of approximately 766 m. This is the lowest point of the ridge of Lomo del Pajarcillo, close to the craggy mountains of the Amurga massif on your right, where the names of the peaks include Garito, Talayón and Pico Amurga.

You’ll have reached this point about 30 minutes after leaving Fataga. Now you need to head downwards, following the wooden posts, taking a few detours to cross some of the small ravines while you enjoy the plant life. The way down is studded with tree lucerne, fennel, Canary Islands lavender (Lavandula canariensis & L. minutolii), carline thistles (the sharpest) and endemic bugloss Echium onosmifolium.

Before you come to the dusty dirt track, the path divides and you’ll need to go left on the more direct route to meet up with the next path.

The extensive views over the entire Santa Lucía palm grove include the small hamlets that make up the borough. On the left you’ll see the vineyards of the Río Tinto experimental plot. An attempt is under way to revive the crop that brought glory and progress to the area in the 17th century, when the local wines were sent to mainland Spain and abroad. Bishop Murga bore witness to this when he praised the good wine in the region on one of his visits.

Cross the track in the area known as Lomo de los Morales and head down towards a small holding pool behind a property with a variety of crops. Go round the holding pool towards a second track. You’re now in El Sitio Alto, where a sign tells you that you’ve just come down via a place known as El Montañón.

Walk towards Lomo de la Cruz, to your left, heading N-NE, as far as a white painted sign saying Coto. This eyesore painted on an upright rock indicates that the area is a hunting ground. A metal pipeline shows the way for the next descent.

Go down an unkept dirt track that zigzags along the centre of the ridge. Watch out because on one of the curves you need to go off to the right towards a flat area, where you’ll see some plastic sheets from abandoned hothouses. From here you need to look out for the path on the left that heads down among the rock roses towards the bottom of the Tirajana ravine, which you can see from here.

This section takes you down a path surrounded by slabs of stone. Look out for a narrow path you need to take on the left. You’ll walk over stones that range in colour from deep red to a beautiful grey-green. A slope with loose stones on one side confirms that you’re on the right path, although take care through this part because it’s quite eroded and slippery. After that the narrow path crosses a small ravine with reeds in it and then you go up a short way on the side with green rocks. This area is known as Barranco de los Tabucos and the community association in Los Sitios is named after it..

From here you have two options: either go straight down to the bottom, in which case you should follow the path that goes as far as two large rocks placed next to a palm tree, or continue on the path you came on, passing a lone palm tree and coming to a narrow stony path where you’ll find several rocks with the word coto (hunting ground) painted on them. A little further on, the stony path curves to the left then goes down to the bottom of the Tirajana ravine, where you’ll see Canary willows and plenty of reeds..

When you’ve crossed the bottom of the ravine, which always has water in it, you’ll need to walk to the right, heading downwards for a few metres as far as a cave in a rocky area on the left (as you look downstream). From here you’ll see the ascent to the next path that will take you to the “Cho Cabello” water mill, one of the largest in the area and well worth a visit.

Go back a few metres to rejoin the path that heads upwards. After several curves you’ll come to a dirt track opposite you, which you need to go up, without going onto any of the adjoining properties. You’ll come to the hamlet of Los Marteles, near Plaza de Ingenio..

The place name comes from Ingenio Rojo (Red Mill), a sugar mill built at the beginning of the 16th century, initially commissioned by Diego Cabrera and completed by the son of Alonso Rodríguez de Palenzuela. It was once one of the most important sugar mills on the island, along with the mills in Arucas and Gáldar. After construction of the mill, Palenzuela ordered a chapel to be built to honour San Lorenzo (Saint Lawrence).

After about 15 minutes, following the gentle rise on the sealed road, you’ll come to the lookout at Mirador de Ingenio. From here you can enjoy the views and take photos of the lush palm grove in Las Tirajanas, the houses in Casas Blancas and the rock formations of Roque Almeida and Morro de las Vacas.

From here you have various options to reach the centre of Santa Lucía. One way is to head to the back of the lookout and take a sealed path leading down to a group of eucalyptus trees that provide a welcome shady spot for a rest. Opposite the trees is a dirt track with a sign that says “C.R. La Longuera”, on your right. You need to follow the signs, although as this reference could disappear over time, you could also bear in mind that the track goes in a straight line for about 600 m alongside a concrete water channel containing a pipeline. You’ll see the dome of the church ahead of you. When you come to a curve and a small gully, you’ll see the water channel going up the gully. Head up on the right hand side until you reach the first houses in the town. You’ll come out on the main road, where you’ll find the restaurants and the bus stops, marking the end of the walk.

As visitors to Fataga walk along the narrow, winding alleys they are reminded of other towns of Castilian and medieval Spain where the buildings are centred around the church and the town square. The history of Fataga goes back a long way.

The town was mentioned in the chronicles of the conquest of the island in relation to a journey made by the governor, Pedro de Vera, and captain Miguel Muxica: On the fifth day of the month of November (1482) [sic] they went to a place, which is on some lands known as Fataga, where the Canarians said no Christian man could reach, and in that place they entered by force and the people could not be taken because of a very large mountain range that was next to the place where they took refuge: and there three Canarians died, and a woman who deliberately threw herself off a cliff; and much wheat and barley remained there.

Until the 18th century, Fataga was the second largest settlement after Tunte, but the gradual move to the coastal areas of Maspalomas and Juan Grande led to its decline. The church was completed by the local people in 1896 and dedicated to San José (Saint Joseph). The parish was created in 1924.

Fataga has received many awards for its traditional constructions that respect Canary Islands architecture in the unique setting of the palm grove and the steep mountains surrounding the town. Visitors can also see the fertile terraced land, where a large amount of fruit is produced, particularly the highly prized apricots.. (CAZORLA LEÓN, S. Los Tirajanas de Gran Canaria. 2000). 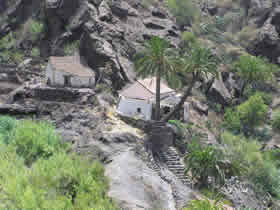 Also known as Los Cabellos water mill, this is one of the most beautiful mills on the island due to its state of preservation and the two Canary Island palm trees standing guard next to it. Its catchment pond has a depth of 15 metres and you can still see the channel that once collected water directly from the bottom of the ravine. The mill is no longer in use and is now a private home. It takes its name from the surnames of the former owners. (RODRÍGUEZ DÍAZ, JUAN. Molinos de Agua de Gran Canaria. 1989). 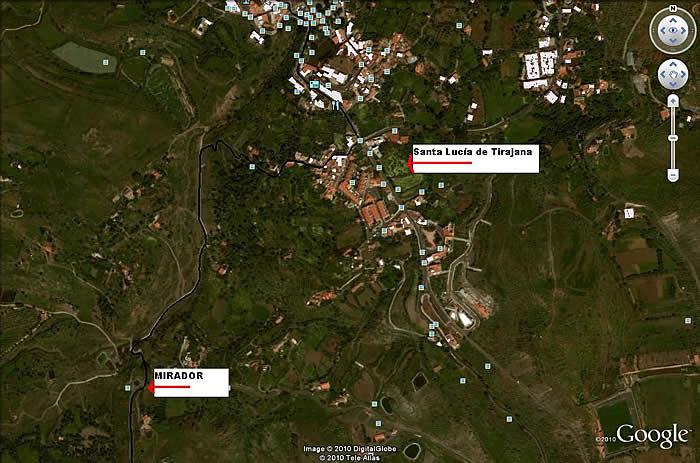