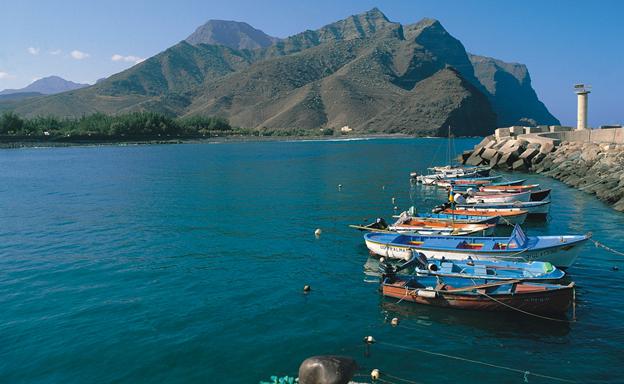 The Village of La Aldea de San Nicolás is bounded on its northern and eastern limits by cliffs and ravines and stretches from north to south on an irregular 33-kilometer coastal strip. Its rugged coastline has high, rocky precipices with beaches or small coves that signal the mouths of ravines or gullies.
This arrangement of volcanic formations has been developing an erosive process to date. It is a geomorphological unit of great scenic beauty and an extraordinary scientific interest, since it is located in the oldest part of the Island.

The tomato crop is the main activity of the municipality, which has one of the ravines that receive more flow of the island, since it hosts the bed of the Tejeda basin where several of the largest capacity dams of the island are located. These places can be visited along a spectacular road route.
In San Nicolás Village there are different protected areas, including the Rural Park of Roque Nublo, the Natural Park of Tamadaba, the Inagua Nature Reserve and the Güi-Güí Special Nature Reserve, whose beaches have captivated visitors.

The town’s natural surroundings are exceptional and boast a variety of routes and trails in which you can see the scenic beauty of western Gran Canaria. In all, 90% of these areas are protected.

The Rural Park of Roque Nublo is the most extensive protected area of Gran Canaria, divided between the towns of Tejeda, La Aldea de San Nicolás, Mogán, San Bartolomé de Tirajana, Artenara, San Mateo, Valleseco and Moya. Here you will find the emblematic Roque Nublo, representative of the island of Gran Canaria.

The Tamadaba Natural Park encompasses the towns of Agaete, Artenara and La Aldea de San Nicolás, and is one of the island’s oldest geological formations.

The Inagua Nature Reserveis a pine forest that covers the old massif of the center-west of the Island, with spectacular landscape perspectives. It belongs to the towns of La Aldea, Mogán and Tejeda, being a Special Bird Protection Area.

A stroll through the town of La Aldea de San Nicolás itself allows the visitor to appreciate the Canary popular architecture: the stone and mud houses, from the 17th and 18th centuries, and the balcony houses of the eighteenth century. Examples of these are the Casa del Balcón, the first house in the urban area, Casas Blancas and Casa del Corredor, the latter in the neighborhood of Tocodomán.

The town’s Living Museum is very popular. Here Canary culture and traditions are staged. Threshing with animals, the making of bread in a traditional oven, the milking of goats, the tasting of milk with gofio or the elaboration of cheese are some of the performances that can be observed.

The aboriginal legacy is also very important in La Aldea. In the Archaeological Complex of Los Caserones there was a rich collection of pintaderas and idols of clay and stone that are currently preserved in El Museo Canario. Currently, you can visit the Burial Tomb of Lomo de Caserones.

We recommend visiting the four windmills and water mills; the lime and pitch kilns and the rum distillation plant that operated here from 1936 to 1958, at La Aldea Beach.

Along the town’s 33 kilometers of coast there are stone beaches, small coves, caves and sandy beaches. Most are little-traveled beaches that are preserved intact in a natural, even pristine landscape.

La Aldea Beach itself is noteworthy, the most popular as it is located in the town. Further out of town, the Beaches of Tasarte and Tasartico, and, very especially, the beaches of GüiGüi, of black sand offer great beauty for the surrounding environment. 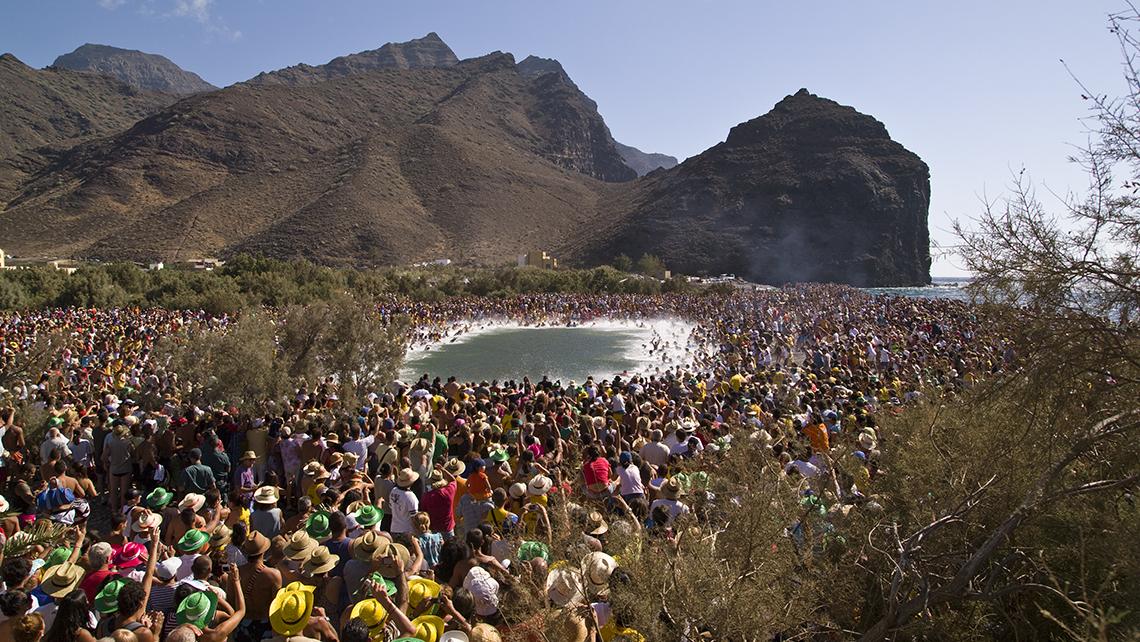 JULY 16 Feast of Carmen, the co-patroness of the town.
10-11 SEPTEMBER The Patron Saint Festivities of San Nicolás take place between the 1st and the 15th of September with a procession of the Saint through the main streets of La Aldeade San Nicolás, to end with a pilgrimage-offering to the Patron, in which they bring together folklore, the best crafts and the gastronomy of the town. The day before the festival takes place the Bajada de La Rama, originally from the Canary aborigines, who descended from the high peaks to the sea in times of calamities and droughts to ask for rain. Finally, on September 11, the unique Charco Festival is celebrated, which revives the custom of the ancient Canary people of embascar (aboriginal fishing technique) in the coastal waters, and to which many visitors come from other Island towns.