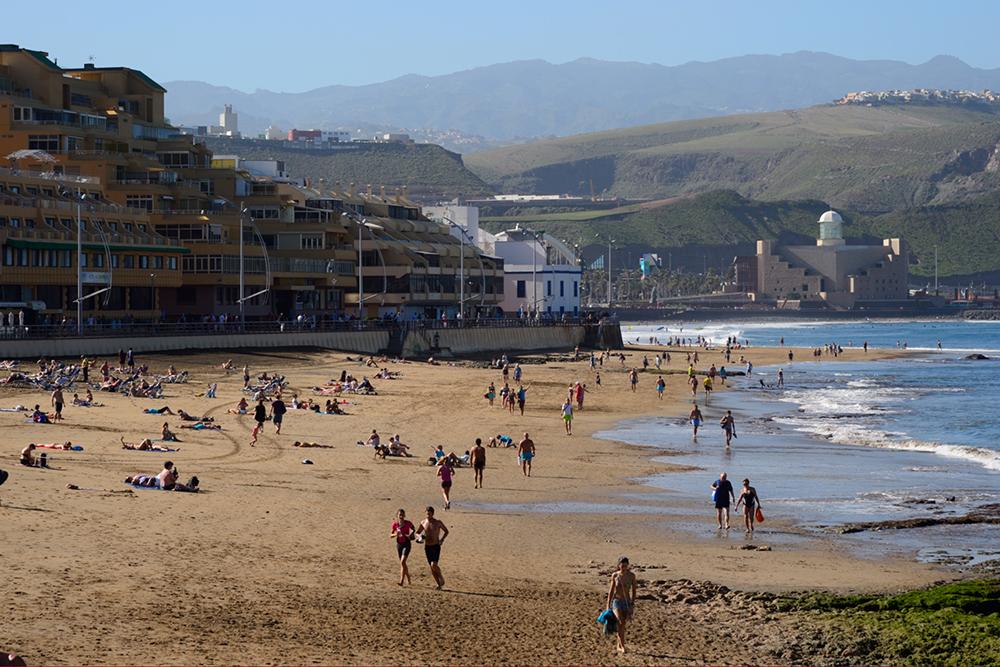 Las Palmas de Gran Canaria is the most cosmopolitan city of the Canary Islands and enjoys the best climate in the world due to its exceptional location, next to the Tropic of Cancer, and the trade winds that come from the North Atlantic. The result is an average temperature of 17º in winter and 25º in summer.

Its privileged geographical location also makes it the European capital of the Mid-Atlantic and a cultural and economic linkfor Europe, Africa and America. Capital of Gran Canaria, the city also shares the regional government seat of the Canary Islands, with Santa Cruz de Tenerife. 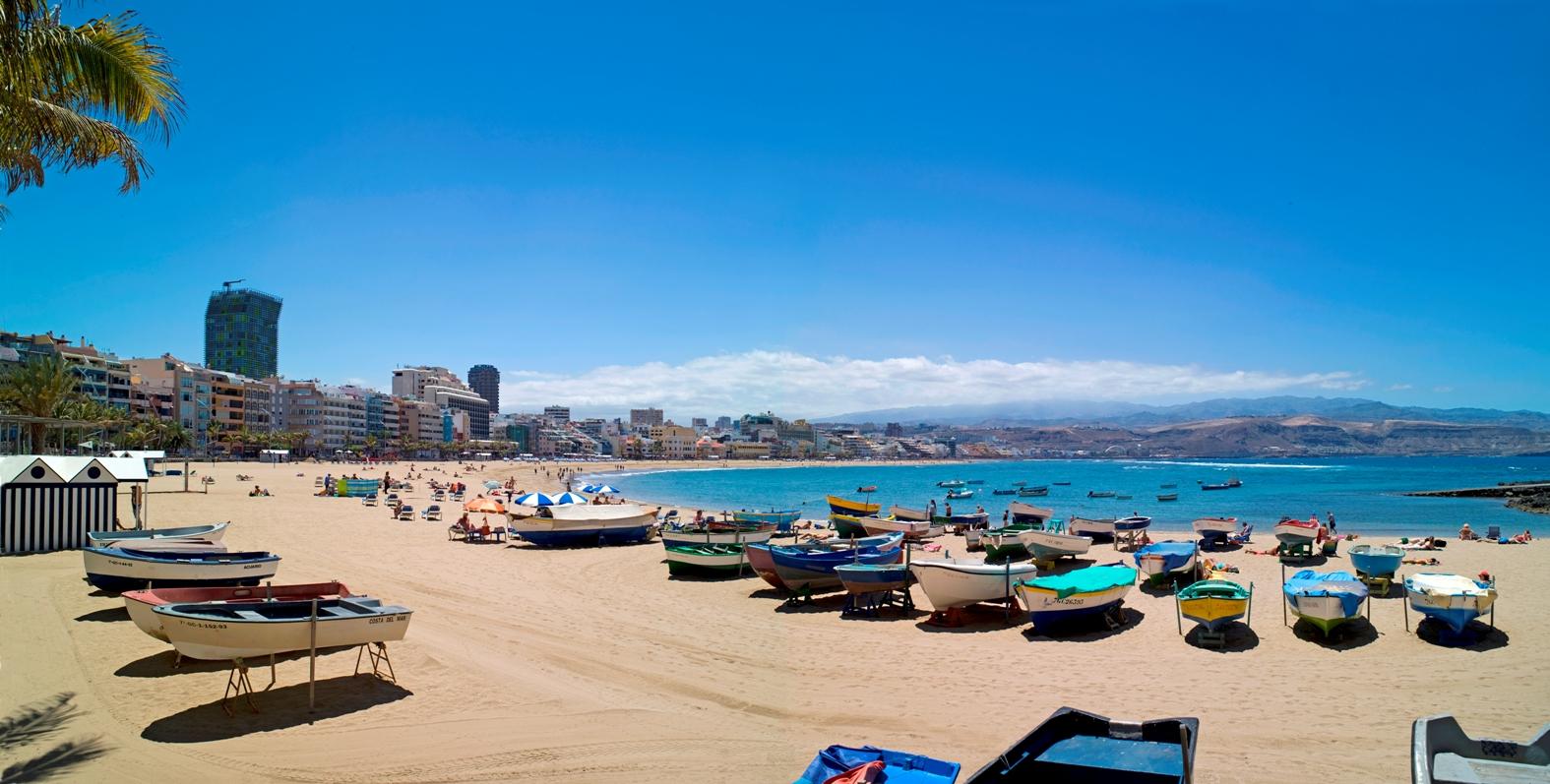 The beach of Las Canteras is one of the best urban beaches in the world: a rare gem, in the middle of the city, that the visitor can enjoy sunbathing or practicing sports on foot of sand. Also for surfing, diving or snorkeling, sailing in a canoe …

Sports clubs and schools in the surroundings facilitate these entertainments, among which the tour must be included: a local tradition, because many citizens of Las Palmas de Gran Canaria, especially in the early morning or at dusk, dedicate their time to travel the three kilometers of coastline that extend in a gentle curve from the Alfredo Kraus Auditorium, the Plaza de la Música and the surfer area of La Cícer to La Puntilla, anteroom to the popular La Isleta neighborhood.

Furtheralong, the tourist may continue strolling along the Los Nidillos avenue, and arrive at the natural refuge know as El Confital, also favored by surfers and those seekingserenity, an open environment away from the city and a moment of relaxation to enjoy its sunsets.

These experiences are transferred to the urban promenade that accompanies Las Canteras, dotted with numerous bars and restaurants ideal for aperitifs, breakfast, lunch or dinner. Something that turns the beach, natural theme park of Las Palmas de Gran Canaria, into an environment with a lively urban life. 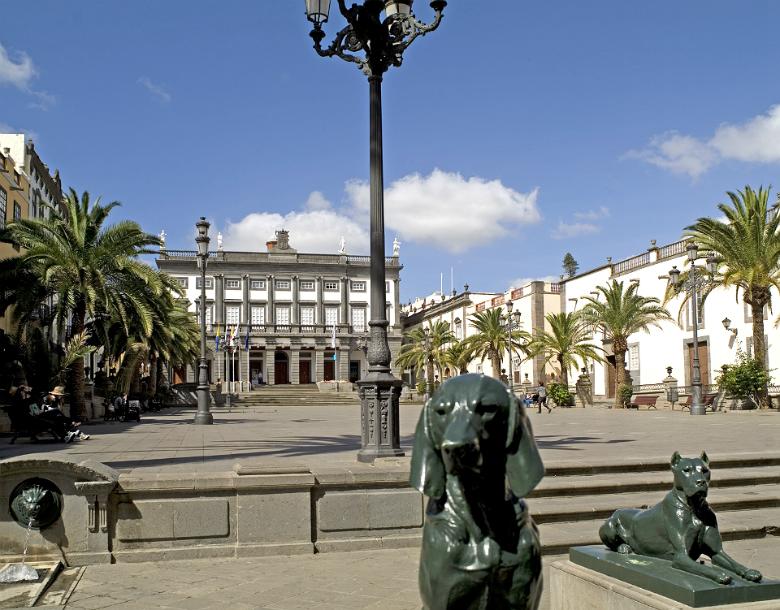 Before his first trip, that of the Discovery, Christopher Columbus landed in Las Palmas de Gran Canaria to repair one of his ships, La Pinta, in a necessary stop before crossing the Atlantic. The city, at that time a small settlement founded shortly before, in 1478, began to be conceived around what would later be the historic center of Vegueta and the Guiniguada Ravine.

Today, the old quarter offers a unique picture on this side of the ocean: an area of Colombian architecture, in which the Santa Ana Squar estands out and, at its ends, the town hall (the first town hall, still the seat of the plenary sessions). municipal) and the Cathedral. 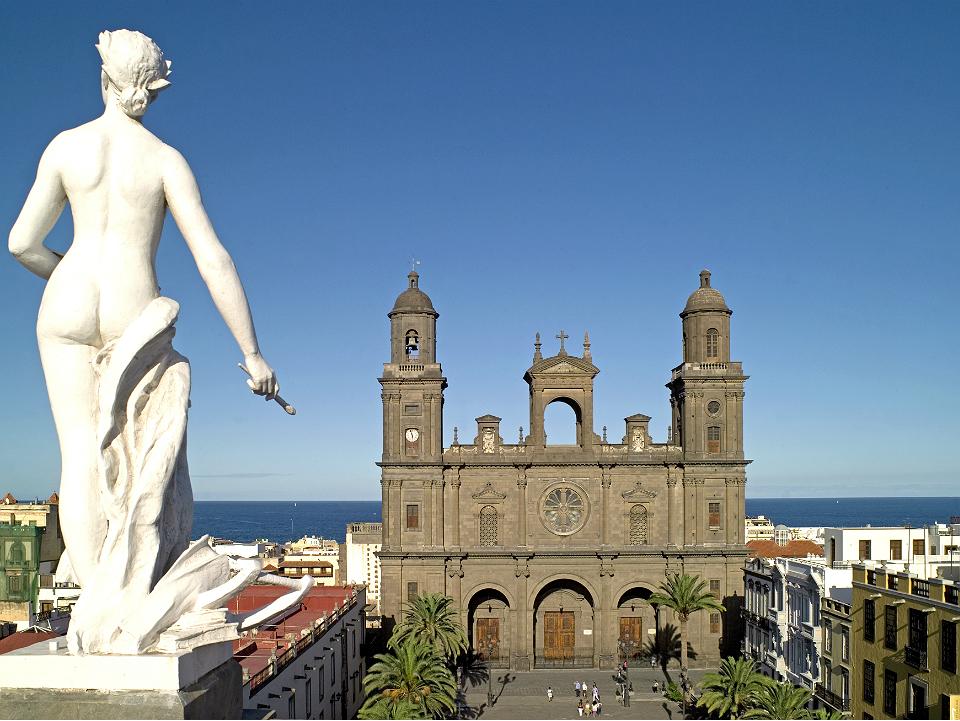 Its museums (the Casa de Colón, formerly the Casa del Gobernador and dedicated to the discoverer, his epic voyage and his life and times. Nearbyyou will find the Canary Museum, with its aboriginal legacy, the contemporary Centro Atlántico de ArteModerno (CAAM, modern art gallery) and San Martín Contemporary Culture Center. There is also the Pérez Galdós House-Museum, in the Calle Mayor of neighboring Triana. All these centers make up the cultural offer of an environment that also includes buildings such as the Hermitage of San Antonio Abad, where Columbus the sailor prayed before setting sail across the Atlantic.

In addition, Vegueta, Triana and its surroundings are currently highlighted by a wide range of restaurants, ideal for visitors to have a complete experience in the old city.

Las Palmas de Gran Canaria has become the vaunted 21st century destination with an interesting gastronomic variety. An extensive menu that includes the typical local cuisine (wrinkled new potatoes, pork leg, seafood and local products along with an assortment of Canary cheeses), but also highlights an inventive presentation of these dishes from a contemporary perspective.

Indeed, the city stands out for its wide range of restaurants and bars with a range of cuisines, and delights suitable for all palates. This is especially appreciated if you travel as a family. In the surroundings of Las Canteras, there are a multitude of places with international cuisine on offer, for tasting specialties from most every corner of the globe.

The historical center of Vegueta and Triana, with a wide map of restaurants of all kinds, the fishing district of San Cristóbal (famed for its fish and seafood) or enclaves like the Marina (the Sports Pier and its premises) complete this varied and rich gastronomic offer, an imperative almost for the tourist. Las Palmas de Gran Canaria is, without a doubt, a destination for folks who want to eat well … and accompany the tasting with the extensive assortment of local Canary wines.