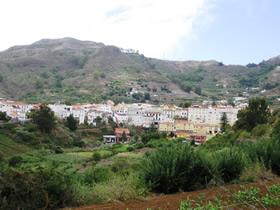 Getting there: This walk is well served by public transport:
Frequent departures from Las Palmas de Gran Canaria on a number 303 or 323 bus will take you to San Mateo.
From Telde, take a number 13 bus. From the south of the island, you can get to Cruz de Tejeda and San Mateo on a number 305 bus.
Starting point: Church in San Mateo.
Distance: 4.8 km approx.
Time: 2 hours.
Level: Easy.
End point: Same place.

The walk starts in the town centre of La Vega de San Mateo, in the borough of the same name. The borough has an area of approximately 38 km2 and a population of about 8,000. It lies in the centre of Gran Canaria and includes the island’s highest peak, Los Pozos de la Nieve, at 1,949 m.

The area was known to the native inhabitants as Tinamar. After the conquest of the island, it was called La Vega Alta, in reference to the fertile land (vega means “fertile plain”). It was once combined with La Vega de Enmedio (now known as El Madroñal) and La Vega (now known as La Villa de Santa Brígida) to form the largest borough in the centre of Gran Canaria.

Before the walk it’s a good idea to see the historic centre, which has a great variety of architectural styles ranging from neoclassical to neo-Canarian. The varied styles intermingle, bearing witness to the passage of time. Constructions such as the church dedicated to San Mateo (Saint Matthew), Lourdes Chapel (Lourdes Chapel), the tree-lined square in La Alameda de Santa Ana, the band stand and the town hall form a good example of neo-Canarian style very near the start of this walk.

Another building not to be missed is La Cantonera, in Avenida Tinamar, inside a 17th century dwelling of a well-off farming family. This is a faithful record of the agricultural and farming activity in the borough and an ethnographic museum with a collection of more than 12,000 items comprising furniture, crafts, and tools used by farmers, potters, weavers and smiths. Another place to visit is the exhibition room in Sala de Exposiciones de La Caldereta, next to Taller José Martí, in a 19th century building on the main street.

After discovering the culture and history of the centre of Vega de San Mateo, it’s time to start the walk.

Look for the intersection of two streets: Avenida del Mercado and Calle Suárez Navarro. Go right from the church, on a slight descent down Calle de Suárez Navarro, which gradually becomes wider. After a hardware shop, you’ll come to a bend and shortly after that you’ll find the start of the path to El Chorrillo (a blue sign shows the way). You’ll see the steps on your left, next to a white wall and a large eucalyptus tree.

The descent is steep. It starts on the concrete steps and then after a turn to the left you’ll come to a dirt track. Avoid taking the path to the right, which goes to several properties with orchards. Keep heading downwards. You’ll be walking between stone walls surrounding crops. You’ll soon have your first sighting of the leafy ravine of Los Chorros, on your left.

The next section of the path is flat but has no barrier, so watch out for the vertical drop on the left and concentrate on where you walk. When you come to an intersection, go right. The path to the left goes down to the bottom of the ravine.

Make your way towards some buildings along a narrow street lined with trees. Near the end you’ll see a clump of white poplars.

The alley then leads directly to the bridge across the ravine to the sealed road in El Chorrillo. You’ll see laurel trees planted by the Community Centre. Each tree has a plaque with information on it.

After crossing the bridge, walk on the sealed road on the right to the next junction, where you need to go left. As you go up, look out for a large conifer (a tall dark green tree) as a landmark. To the right, the road joins on to the island’s central road, the GC-15, at km 9.5.

When you reach the end of the ascent, you’ll come to an intersection, where you need to go right, on a dirt path. When you come to a green metal fence, go around it to your right. A mark in red paint shows the way. In a few minutes you’ll come to the wall of the Toronjo dam. The dam is on the left as you walk over the wall.

When you reach a dirt track, the choices are to either go to the right and head down to a village known as Caserío de Las Huertas (or Lomo Lucas), which is in the borough of Santa Brígida, or take the dirt track that goes down to the bottom of Alonso ravine. These choices open up some of the many possibilities for walks in this area.

However, the walk described here returns to San Mateo at this point by going up the track to the left. This ridge, Lomo Lucas, will take you straight to the main road between San Mateo and Teror, via Utiaca.

The ascent requires a bit of effort. It’s a dirt track the whole way and follows a straight line. You’ll see Toronjo ravine on the left and the new San Mateo cemetery built into the slope. In a few minutes you’ll come to a sealed path that will take you straight to Cruce de La Morisca, at km 14.5 of the GC-42 road.

At this point, without leaving the main road, look for an opening in the guard rail on left. Next to a metal pole painted red, you’ll find the start of the path down. This is the next section of the walk on a very old path that crosses the Toronjo ravine among leafy eucalyptus trees. The path goes up slightly and crosses the next small ravine, La Reyerta, then comes out onto a dirt and concrete path that goes up a steep slope to Cruz de la Capellanía.

Cross the sealed section and continue on the path as far as the next sealed road, known as Lomo Caballo. Go straight across this road as well, to start the final section in the shade of some fruit trees. On this narrow path you’ll come to a concrete path that will take you, on the left, to the first houses in the centre of San Mateo, in an area known as Caserío de Solís. Cross the bed of the ravine and go up to the first streets of the town, where you’ll find the beautiful Lourdes chapel.

At the chapel, turn right and look for a street called Calle de La Feria then head to the scales at the service station in San Mateo. The scales were purchased in 1952 and according to the information panel put up by the local council in this old part of town, they were used “to weigh carts and lorries to show the weight of large loads of agricultural products or livestock”. This small historical note helps explain the past of the area.

Also known as Presa del Lomo Lucas, this dam is at an altitude of 730 m in Barranquillo del Toronjo, a tributary on the left hand side of Barranco de las Huertas ravine. The dam is in the borough of La Vega de San Mateo, between Lomo Lucas and the flat area of La Capellanía. It is privately owned and was finished in 1968. At the downstream boundary the terrain has been modified by an orchard planted below the wall. The v-shaped dam sits between Lomo Lucas and a gentle downwards slope from the base of the volcanic cone of Montaña Cabreja.

The height of the dam wall is 17 m above the bed of the ravine. The dam has a 74 metre straight top and is 1.6 m wide. Its storage capacity is 48,000 m³. For more info, see: www.presasengrancanaria.com (in Spanish).

In 2010, El Chorrillo Community Centre started a surprising, unusual, environmentally educational task. With the help of the local authorities, the members planted Canary Islands trees typical of the area along the sides of the streets and put up signs so people could identify them. They also published a brochure with images of the location of the species and information about their characteristics.

The first thing you need to know is how to get to this village. On this walk you can reach it by the path that goes down from the centre of San Mateo, but you can also get there by car. Take the island’s central road, the GC-15, and at km 9.5 approximately, you’ll see an entrance on the right (as you’re heading to San Mateo) that will take you to the streets of El Chorrillo.

Their scientific name is Tyto alba alba and they have light golden brown plumage. Barn owls can move their facial muscles and look like they’re miming in a variety of gestures beyond our understanding, with various expressions that we perceive as “making faces”. When barn owls are resting, they have a serious look about them. Their jet black eyes stand out against the white feathers of their distinctive heart shaped face. They have long, quite pointed wings with a span of approximately 90 cm. Their cries can be described as snoring, screeching and rattling. Barn owls are strictly nocturnal.

MAP OF THE WALK 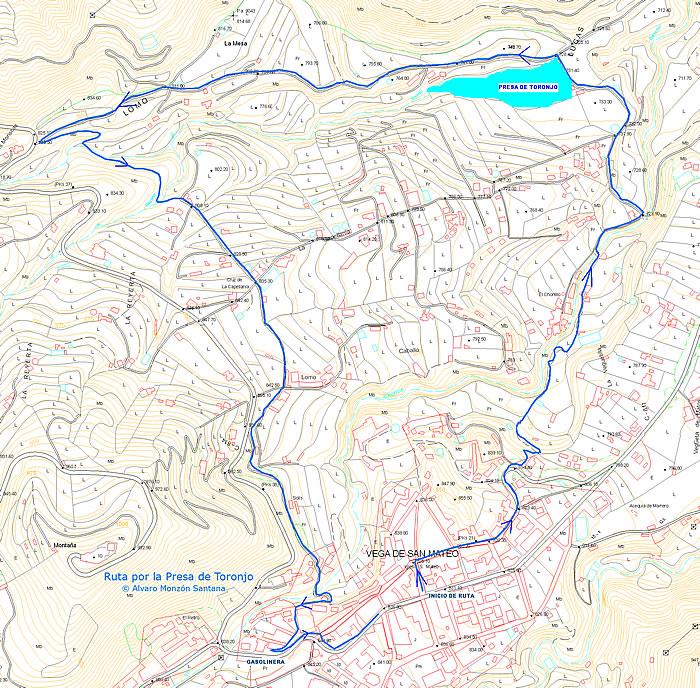