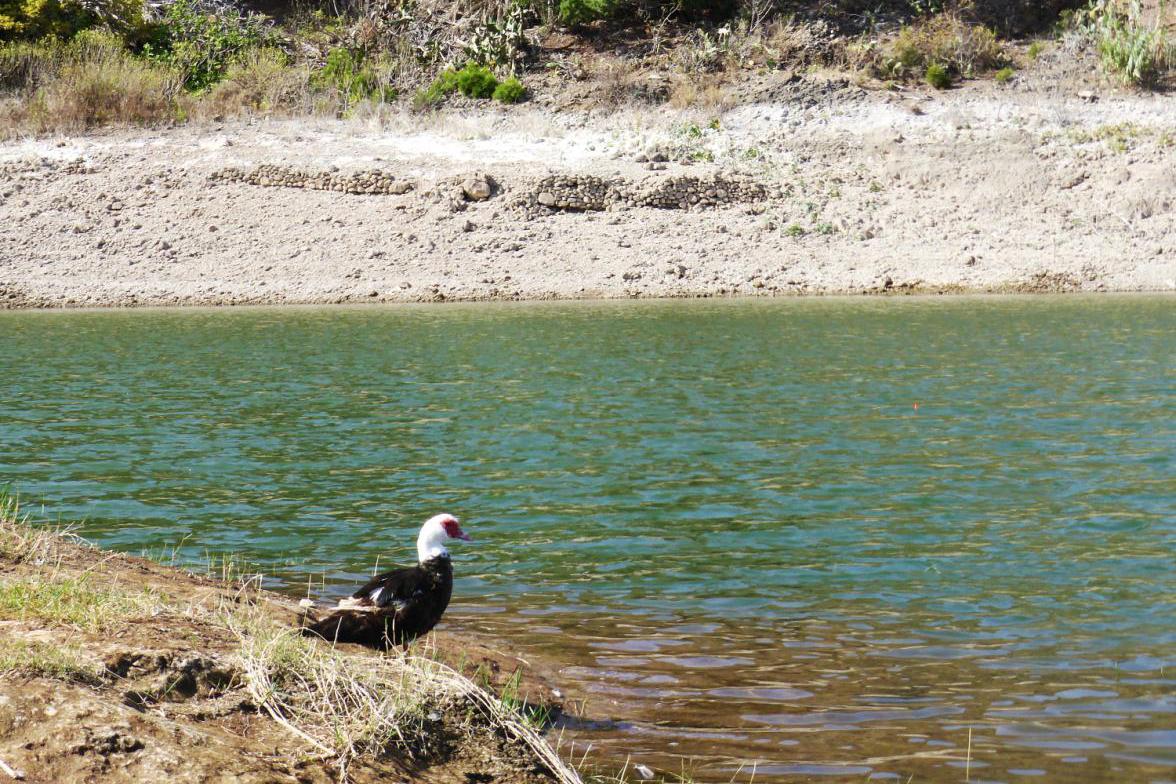 La Hacienda Hoya de Pineda was awarded the status of Cultural Interest Site in 1985. This two-storey estate building has three large wings and a tiled roof. The wings form a patio surrounded by a gallery protected by a running balustrade. The building is an example of early rural architecture in the island.

The entrance is opposite what could be considered the main front of the building and includes a single decorative element: the wall is topped by a column ending with a pyramid shaped block. The layout looks inwards, as the bedrooms and living rooms face the patio and the inner hallways while the austere exterior gives it the look of a convent.

As for the name, there’s some doubt as to whether it comes from the 16th century Pineda family (Jerónimo de Pineda, Governor of Gran Canaria), or whether, as Néstor álamo indicated, the estate house was built under a commission from canon Marcos Verde de Aguilar and belonged to the Aguilar family, which was related to the Pinedas.

This is the first point of interest on this walk in the north of Gran Canaria, between the boroughs of Gáldar and Guía.

Starting point: GC-220 road at the entrance to the hamlet of Hoya de Pineda (indicated as La Degollada on some maps), in the borough of Gáldar
Distance: 7,5 kms. approx.
Time: 3 hours.
Level: Medium.
End point: Town of Santa María de Guía.
Getting there: From the bus station in Las Palmas de Gran Canaria (San Telmo)
Saturdays and Sundays
Bus No. 105, Las Palmas de Gran Canaria-Gáldar, at half past every hour.
At the bus station in Gáldar, take the No 106 bus, Gáldar-Fagajesto: Saturdays at 11:30 am and Sundays at 8:00 am and 12:30 pm.
Get off at the stop known as Cruce de Pineda.

Go about 400 m along the narrow road to the group of houses in La Degollada, where you need to turn right and look for a pylon (substation). This is where the walk to La Hoyeta begins. Go along this road towards Hacienda de Hoya de Pineda, which you’ll see on your left.

Continuing along this street, you’ll come to an intersection with a white house that has a green mail box. A road lined with fruit trees (loquats) goes down on the left and you can see where the electricity lines start.

Walk alongside the power lines on the stone and dirt track. You’ll see some orange trees and a metal holding pool on your left. Turn right at the junction. Look for another building (an unpainted shed) when you come out onto a concrete path, with some eucalyptus trees on the right. On this slight curve, go off the path to your right. Between some reeds and prickly pear plants you’ll find the entrance to the water channel, where you leave the track behind. If you miss this point you won’t be able to find the entrance to the channel. The path is narrow and goes under the shade of some eucalyptus trees and immediately after them you’ll find the channel for the dam known as Presa de Los Pérez.

Take the concrete bridge to cross Fondillo ravine, also known by other names: Bascamao, La Heredad, San Antonio and Las Colmenillas. The channel joins onto a larger one, which is a water collector for Las Garzas dam, in Guía. The five or six channels have a variety of names, but the largest one is known as El Canalote. The others are small channels and secondary pipelines.

This large channel is shaded most of the way and is very pleasant to walk along. When it rains or is very windy, watch out for slips, as they can make it dangerous to be in this area.

A few metres ahead you’ll see Ermita de San Antonio (Saint Anthony’s chapel), at the base of the mountain known as El Cabezo (Montaña de Guía). The chapel was built in the 17th century under commission from canon Marcos Verde de Aguilar. 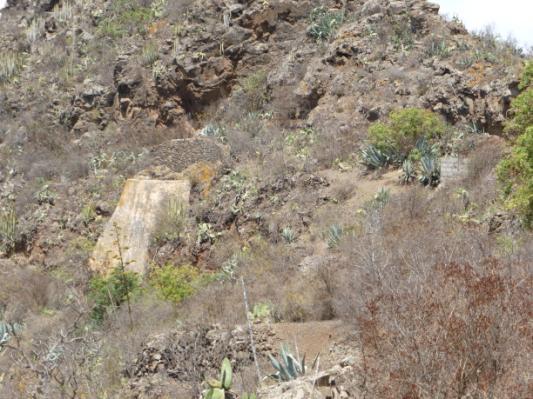 You’ll come to a distribution channel with gates, where you’ll find a path on the right that heads down from the top. It’s said that this path was used by the people of Ingenio Blanco, Lomo Betancor and Lomo Vergara on their way to get water from the San Antonio spring, next to the chapel, which they appreciated for its natural properties and its quality. You can take this path to go up to Cuesta Caraballo, although it’s not part of this walk.

Keep following the water channel and you’ll come to the entrance to a tunnel about 40 metres long. You’ll need a torch and you’ll have to go carefully, as there’s a dip in the floor and some pieces of iron supporting the black pipes. After this tunnel the water channel goes into a different ravine, coming out in Barranco de Cardoso.

At the tunnel exit, two gates close off a receiving pool, but you can go down to the right to go past the metal sluice gates. You’ll find some rungs to help you on your way down. After a stone bridge, go along the channel to the left, next to some black plastic pipes.

Another option is to go up to a white cave dwelling then walk past it on your left, with the channel on your right. Go past a dry stone wall and go down in three zigzags towards the water channel and some mastic trees.

Go up again, towards the outcrop, and look out for a pylon in the distance. This ridge, known as Lomo del Prior, divides the water between Cardoso ravine (on the right) and Guía ravine (on the left).

Go down the crest among some mastic trees and St John’s wort shrubs towards a pass, where you need to go down the side of the Guía ravine on a narrow path among aloe plants, making your way as best you can between the rock and a mastic tree towards a construction at the next pass. This pass is on top of an old water channel.

Ahead of you lies a cave pool with an odd construction, known locally as a calafurnio. It acts as a plug for the pump that draws water from the hollow. A very common local usage, this word also refers to volcanic hollows and may come from the word furnia (area of caves).

Go down on the right to a round holding pool made of dry stone. The path becomes clearer here and joins onto the flat path you need to take to the left. Los Pérez water channel lies below but it’s important not to follow it or you could lose your way.

On this new path you’ll come to another terraced area. Keep to the flat without descending and then go up again. Don’t go down or you’ll come to a dead end. You’ll see the dam on the right and then start to go down towards the vertical wall of the dam, which you reach after crossing the spillway.

This is the wall of Presa de Cardoso (also known as Presa del Capitán), owned by an association known as Heredad de Aguas de la Vega Mayor de Gáldar. As you cross over on the wall you’ll see a smaller dam lower down. This is Presa del Conde, in Barranco del Conde, which has a capacity of 113,345 m3.

Keep going up the track to the Cuesta Caraballo road. Cross over towards a palm tree, where you’ll see a dirt track on the right leading to the wall of Presa de Las Garzas. The track will take you to a hut, then you need to take a path that goes down to the right, where you’ll see a yellow arrow and a water channel. This path goes along the side of the dam, towards one end, crossing over the small ravine on a little concrete bridge. Before that you’ll see a path going down to the left between some reeds, but it’s a dead end. This area has a lot of hydrophilic vegetation and is full of Canary willows.

Go up through a stony area, near a holding pool with buttress walls. When you come out onto a dirt track, go left on the track and at the first turning, take a path to the left, which goes down to Ingenio Blanco ravine, where you’ll see wild olive, palm and eucalyptus trees. This is a good spot for a rest, under the shade of these beautiful trees.

You’re now on the Frejenales path, which goes along the flat then comes out onto a concrete path. Go along this path about 50 metres and then head downwards. There’s no path as such, but you’ll be walking over stones, among wild olive trees. As you go down, look out for a water channel on your left as a reference. You’ll come out of the small ravine at a yellow house and a circular water distributor. 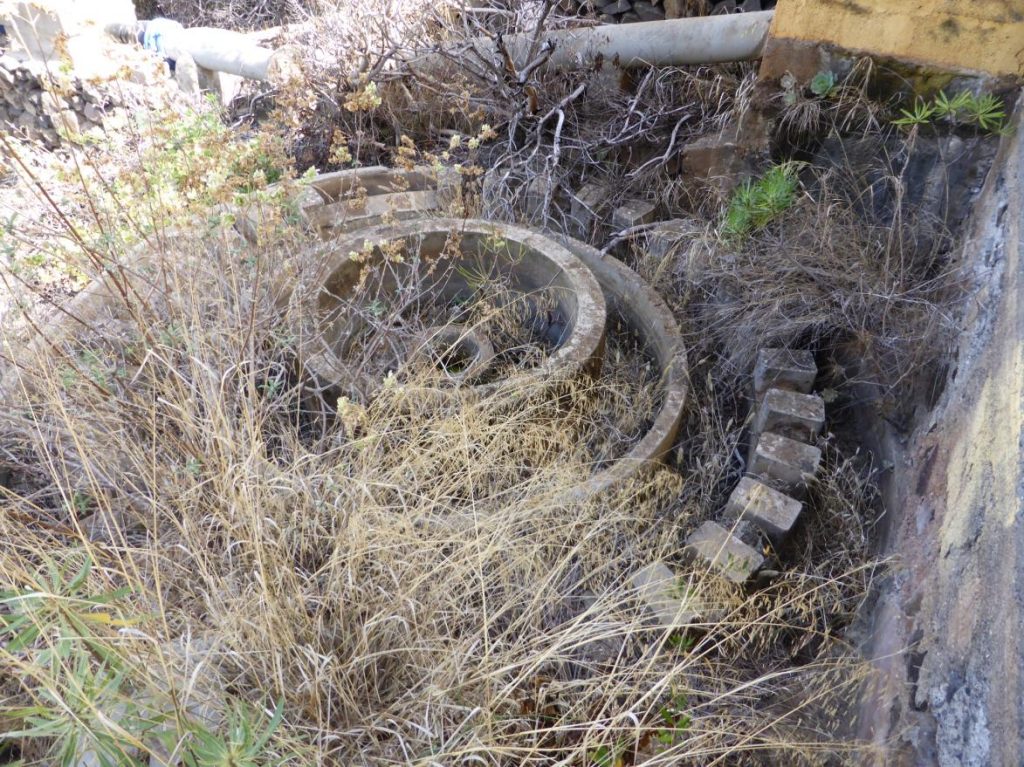 Go down to the edge of the water at Las Garzas dam and then take a dirt track on your right. This track will take you to the wall of the dam. When you cross over the wall you’ll come to a clump of Canary Islands pine trees. Keep to the path until you come to a large car park in front of the old hospital.Continue down the streets of the town until you come to the first church (San Roque) and the old town of Guía, the end of the walk. 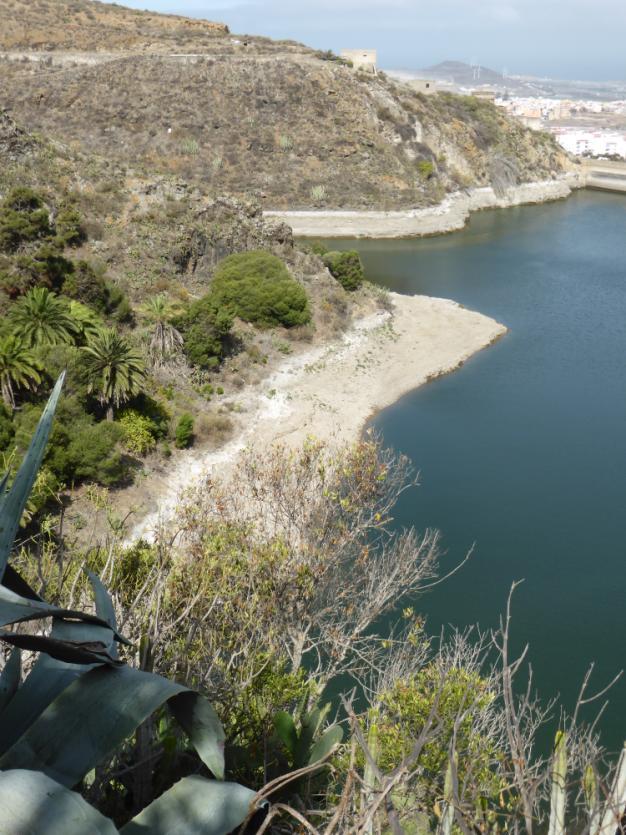 Presa de Las Garzas Dam
Las Garzas Dam is in the ravine of the same name. It has a storage capacity of 612,000 cubic metres and is owned by a water association known as Comunidad de Regantes del Norte. The dam is home to carp and tilapia and in 2002 it was the venue of a regional freshwater fishing contest that brought fishing enthusiasts from all the islands.
Carp (Cyprinus carpio) can reach 80 kg and the females lay around 100,000 eggs per kilogram of body weight.

They’re considered good for eating. The Tilapia, of the family Cichlidae, in the order Peciformes, is a freshwater genus native to Africa. Some species raise their young in their mouth and protect both their eggs and their young by carrying them this way. Among the 14 varieties of Tilapias, the smallest, T. guinasana, is in danger of extinction in Africa. 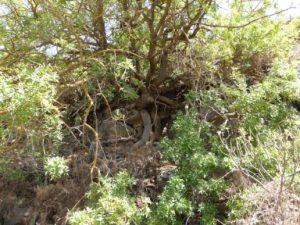 Mt Atlas mastic tree (Pistacia atlantica) (Pistacia atlantica)
This tree is found in the north of Africa and also in the thermophilic forests of all the Canary Islands except Lanzarote and El Hierro. It’s one of the few indigenous deciduous species in the islands. Typical features include the imparipinnate leaves and inflorescences. On Gran Canaria it forms monospecific groves in many ravines on the west of the island.

GENERAL MAP OF THE WALK 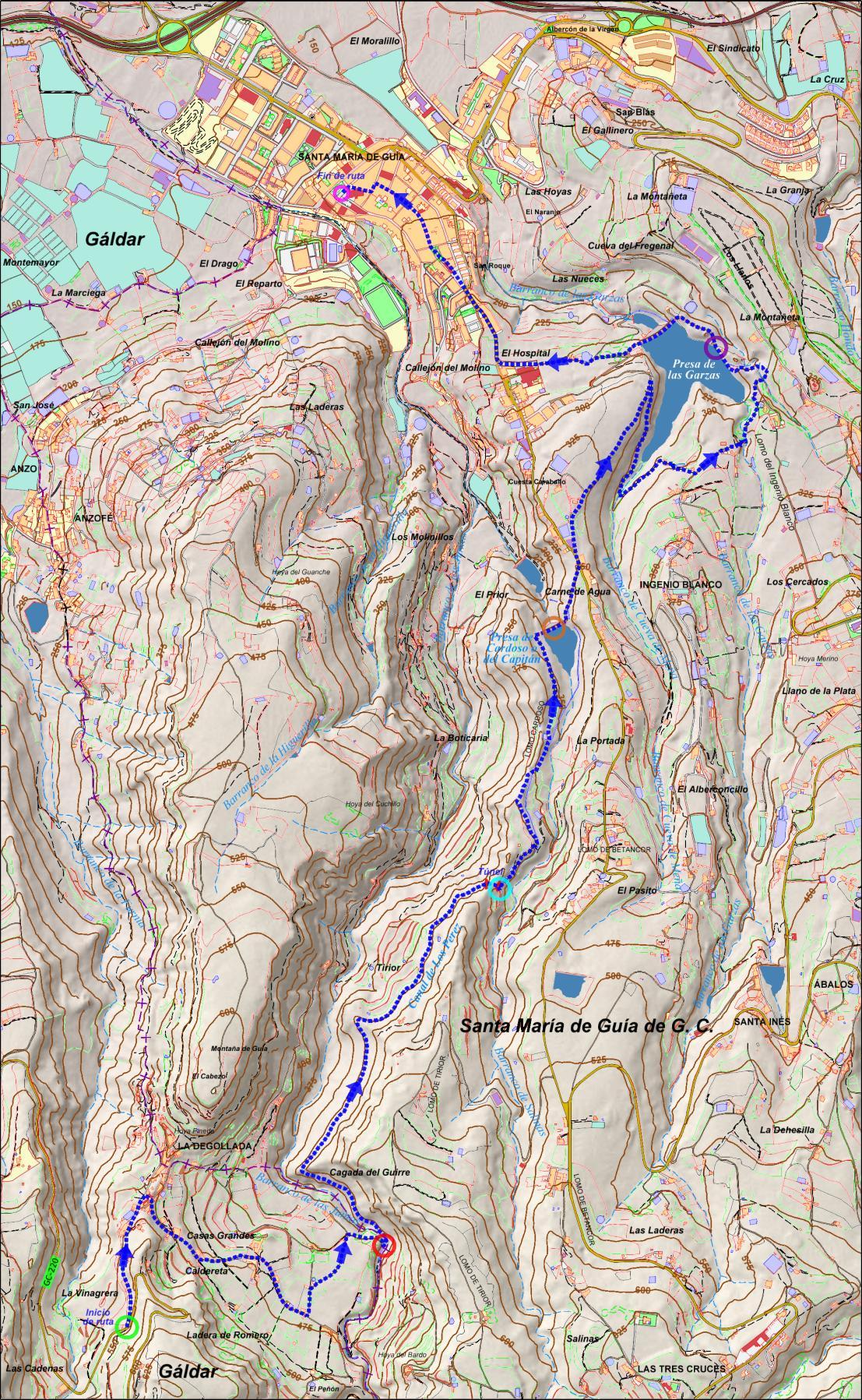 PROFILE OF THE WALK