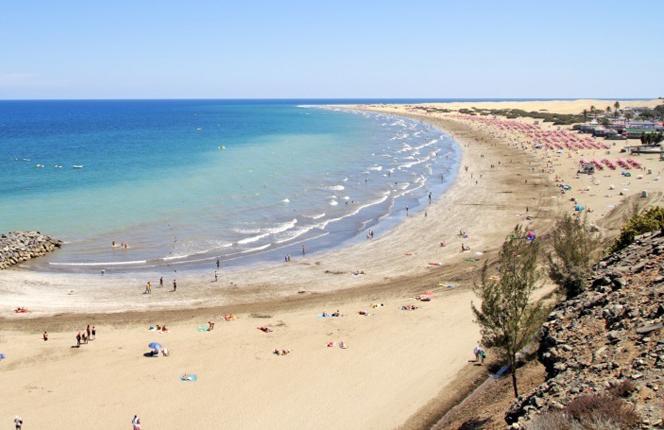 In Maspalomas Costa Canaria nature recreates itself by showing us the full force of its elements: EARTH, sometimes silky sand of golden shades, other blackish of volcanic origin; WATER, from the Atlantic Ocean that splashes undulating and intense; FIRE, of dormant volcanoes and the sun that comes faithful and warm as if by daily appointment; AIR, clean and pure breeze that caresses and fills us with all its essence.

Along 32 km, with large,splendid beaches of fine sand and to a lesser extent volcanic sand, beautiful rocky bottom harbor, a great diversity of marine life and excellent climatic conditions. Sheltered from the waves and ocean currents that predominate in the archipelago during most of the year, the southern coastline is the ideal place to practice water sports. The waves that lap this calm coast keep warm oceanic temperatures throughout the year, ranging from 18º to 25º C.

San Bartolomé de Tirajana offers a small year-round paradise, for those who make the practice of their favorite sport a different holiday, or simply, for those people who always dreamed of trying their hand at some sport. Windsurfing, sailing, swimming, deep-sea fishing or diving, diving or freediving, are just some of the maritime disciplines that you can practice in its waters, under perfect natural conditions.

The Dunes of Maspalomasnature reserve is a unique place in the world impregnated with an almost magical beauty. It encompasses more than 400 hectares: a large expanse of dunes, a tidal pond and a palm tree grove constitute a set of enormous landscape, geomorphological, botanical and faunistic interest, unique in the Canary Archipelago and declared since 1987, Protected Natural Area of National Interest.

The night in Maspalomas Costa Canaria unfolds all its attractions. The soft breeze of the island nights can be the perfect excuse to wander through some of its most acclimated areas. Pubs and discos, bustling dance clubs and social gatherings, permeate the night of contemporary music and sensual tropical rhythms for nightlife enthusiasts. At the same time, terraces and restaurants are filled with people willing to enjoy moments of entertainment or relaxation.

A range of theme and water parks make a paradise for adventure lovers in the company of the whole family. The Villa de San Bartolomé de Tirajana is a surprising place where each person will find leisure to suit them, including the little ones. During the day the leisure spaces are centered in the amusement parks, aquatic parks, theme parks, shopping centers and practice of all kinds of sports. Entertainment and activities for all ages are guaranteed.

Among its more than 300 km2, the Villa of San Bartolomé de Tirajana preserves a spectacular variety of landscapes. Here the island’s nickname as a Continent in Miniature takes on a new dimension. A countryside of strong contrasts that move us from the spectacular blackish mountain peaks, to the soft undulating line of its beaches. Its exceptional vegetation and animal universe, of incalculable ecological value, closes the circle of a place different from everything you have ever seen.

Real natural jewels hide among these protected natural spaces. The botanical landscape, made up of rare endemic specimens, is a dream for lovers of botany, while the palm trees impress and characterize a unique place. Few places on the planet offer such extraordinary conditions for the observation of the physical, biological and even astronomical environment as that of the Canary Islands.

Enclaves of great archaeological and ethnographic value are located in this great natural reserve that is the Villa of San Bartolomé de Tirajana. Meanwhile, the fauna makes the island the international destination of ornithologists and birdwatchers for the value of the island’s avifauna, to which is added the endless parade of nesting and migratory birds.

Maspalomas offers a particular challenge with its more active leisure sports. Mountain biking, paragliding, climbing, or simply doing roads that seem impossible. Flying in a transparent sky, challenging you with the rocky and rugged island geography through classic climbing, bouldering or canyoning under a near constant sun, constitute a world full of adventures for the most determined of our visitors. The dream of flying becomes equally viable in Maspalomas: hang gliding or paragliding are the most widespread modalities in this part of the island.

Crossing ancient roads that go from coast to peak becomes a source of incalculable culture, tracing the footprint that the ancient inhabitants of the island left behind. Whether on foot, by bike or on horseback, the ridge area offers visitors a multitude of rural paths of exuberant beauty, surprising you at every turn of the road, in every town, in every ravine or valley. Only your physical capacity will be able to put limits to this waste of life, only she will be the one to decide whether to choose between a simple walk and the fiercesttrekking.

Amid mountains and streams, small white farmhouses emerge, simple and humble constructions that hint at the essence of rural life. Noble, welcoming people, calm and peaceful prototype of the lucky ones who enjoy the peculiar isolation of an island, who through their popular and cultural manifestations, tell us about their traditions, their art, their celebrations and the simplicity of their home life. In town areas, hamlets and archaeological sites we find a large part of the historical, artistic, ethnographic and archaeological heritage. We can take it in through thematic itineraries.

The local festivities provide a playful insight into Maspalomas popular culture. In these celebrations, locals meet up to share their music and folk dances, play or watch time-honored sports, tastethe products of the earth, attend religious observances and the township’s other popular traditions. They wear typical costumes for traditional pilgrimages, which commemorate the completion of agricultural or fishing tasks, in the case of the coast. These pilgrimages are held throughout the township. In them, local groups, dressed in their best clothes, interpret the best Canary folklore: isas, folias, seguidillas, malagueñas, arroró and songs of challenge among the existing variants.Aromas and traditional flavors of this land will be the unforgettable memory of the sensations enjoyed during your stay.

The traditional Canary cuisine, simple but at the same time rich and varied, is always prepared with natural ingredients such as meat or fish, seasoned with fresh vegetables and fruits as well as the unconditional “Canary potato”, which is never missing from the table of this Earth. Honey and nuts, especially almonds, are the basis of our sweets and candies such as marzipan, bienmesabe or frangollo. The wine of the region, young and soft, the rums of cane, or homemade liqueurs like “La Guindilla”, are among what you can drink before, during and after a good meal of the place.

The visitor may feel like an amateur archaeologist for a few days, since the old Canary Islands occupied the territory of the city taking advantage of the resources offered by the environment and the trace of their presence is visible in the numerous archaeological sites distributed throughout of the township. The historical and artistic heritage is preserved in ancient civil and ecclesiastical buildings housing pictorial works, imagery and sculpture. On the other hand, the construction highlights numerous buildings of different architectural styles in which there are remarkable examples of traditional architecture in stone, wood and tile.