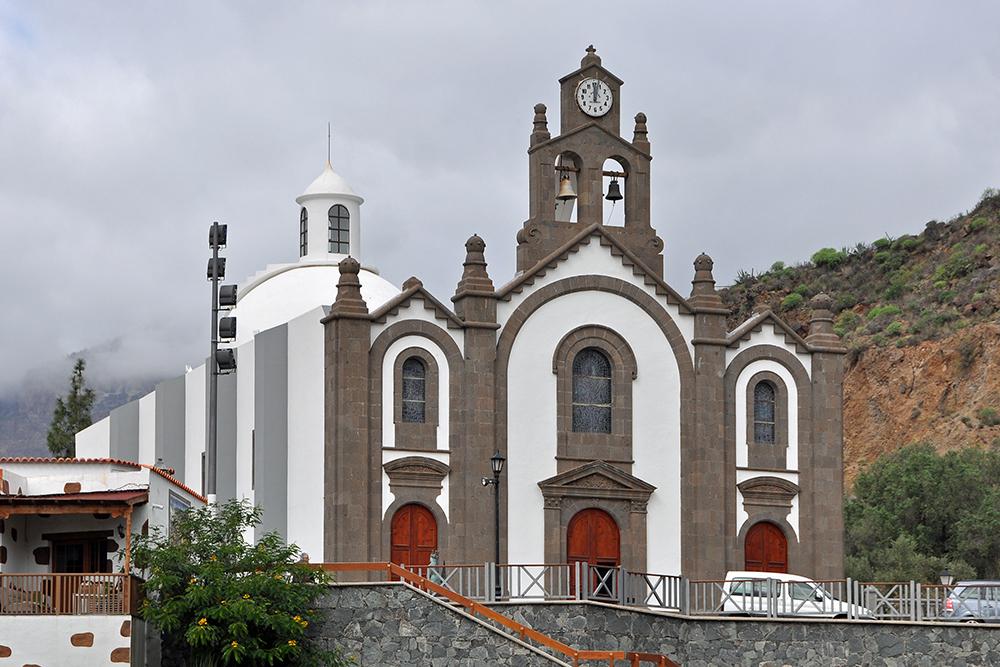 Since it was first settled, Santa Lucía has been divided into two areas: the interior, where the capital is located, Santa Lucía, where there are greenlandscapes full of tradition and culture; and the coastal area, where the main commercial core of the municipality is deployed.

The space that occupies 61.55 square kilometers, is characterized by the concurrence of ancient and recent volcanic materials, which gives rise to a very rugged upper mountain area, where the Barranco and the Caldera de Tirajana, and a wide plain are found coastal area in which the Pozo Izquierdo beach stands out.

In Santa Lucía, culture and heritage are manifested in places like Las Fortalezas, where the Canary Islands conquest lived its last days, churches that have seen the passing of time imperishable, such as Santa Lucia, or mills that were an important economic resource in other times.

The natural spaces of this area of the island show extensive palm groves that run along ancient paths, deep ravines and spectacular landscapes that will not go unnoticed in the eyes of the visitor.

Church of Santa Lucia
The whiteness and shape of its dome make it unmistakable and can be seen from afar. It was built in 1905 and is located in the same town square, on a hill. Its cobbled façade with carved singing with historical-religious motifs stands out. It has images produced by the Luján Pérez school as well as a work by the painter Jose Arencibia.

Hermitage of San Nicolás
It was inaugurated on October 1, 1915, but began its journey since the late eighteenth century. After several restoration processes, today it is used as the House of Culture of Sardine.

Tirajana Dam
Located in the Tirajana ravine, thissetting has a great scenic and ecological uniquenesswith the most beautiful palm groves on the island, such as La Sorrueda. For many years, the dam of Tirajana has been the image of the island of Gran Canaria in the Tourism Board.

El Valle Oil Mill
Old oil mill located in the upper area of Santa Lucía, in El Valle, is a beautiful example of traditional Canary architecture. Inside there is a unique example of an oil mill, as it contains two pressing beams, instead of the single beam that was common.

Tirajana Ravine
The head of this ravine is a large volcanic calderabordered by sharpridges. The medium channel is characterized by having a highly embedded V profile. The low channel is constituted by a wide alluvial plain that extends to the sea.

It has been formed by erosion, countless centuries of extreme weather conditions and the existence in the soil of impermeable layers interspersed between flows. Within the caldera highlights the presence of a monolithic python, the White Risco. The vegetation of the area is based on substitution scrub, the Canary pine in the highest areas and the Canary palm tree.

Pozo Izquierdo Beach
This beach, characterized by strong winds, is considered one of the most important in the world for windsurfing. For this reason it is one of the main references in the circuit of the Windsurfing World Championship, PWA, of which every year hosts several tests. In Pozo Izquierdo, the world’s multi-champion sisters, Iballa and Daida Ruano Moreno, were initiated and curtained.

Pozo Izquierdo Burial Mounds
Located in the area of Pozo Izquierdo, on the Tenefé plains, this is an archaeological funerary complex composed of the remains of 11 tubular structures, made of dry stone, which are arranged along the coastline.

Lookout Points
GURIETE, located in the natural area of Guriete, which can be reached by taking the GC-500 rural roadway.
INGENIO, located in the area of Ingenio de Santa Lucía, from it you can see all of the Tirajana basin with its palm groves and olive plantations.
LA SORRUEDA, a place that maintains all its Canary flavor. From here you can see the most important palm grove on the island. 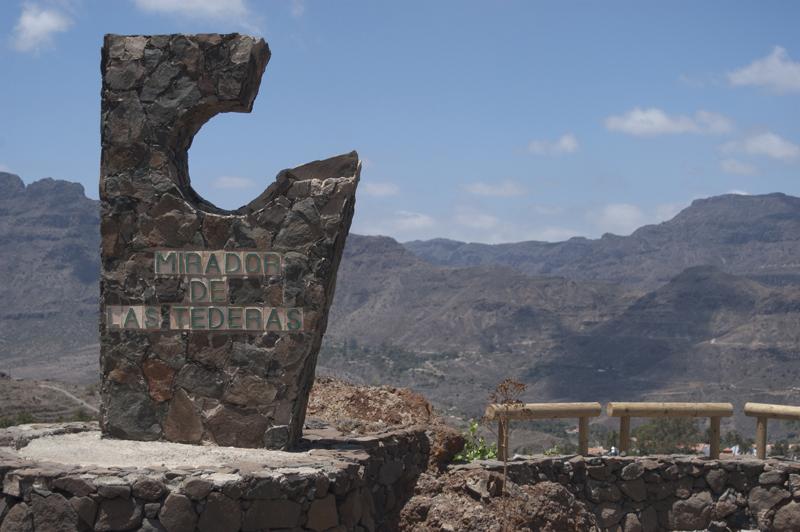 LAS TEDERAS, located near the area of Las Tederas, it is only accessible on foot or private vehicle. Next to this viewpoint is the nature center bearingthe same name.
The most important aspects of Santa Lucia’srecent history, those related to the cultivation and packaging of tomatoes in the lower area of the township, are contained in the Museum of La Zafra. 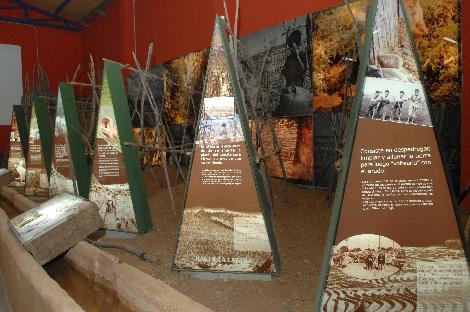 The complex has more than 4,000 square meters structured in 12 rooms and has two buildings. The information panels throughout are presented in Spanish and English. The museum staff will accompany the visitor at all times, individually or as a group, and explain the highlights during the visit.

They occupy a plot on the first line of the maritime border, with a useful area of approximately 20,000 square meters. Las Salinas de Tenefé was declared a Site of Cultural Interest, with an Ethnological Site category, on April 26, 2005.The salt flats have an interpretation center, located in the old house.

The visits to the salt complex have two different parts, beginning with a tour through the salt pans, to make contact with the environment, offering the visitor an overview of the saltproduction process. Afterward, visitors continue up to the second-floor interpretation center. Prepared as an exhibition room, various panels, computer supports and reproductions show the different historical, natural and anthropological aspects of salt.

Grazing Interpretation Center
This ethnographic space is located in Casa Pastores, in lower Santa Lucía township, which was named after this traditional occupation that continues today in the southeast region of Gran Canaria.

The center covers 324 square meters arranged on a single floor. Created with the aim of disseminating, protecting and conserving the ethnological heritage related to pastoral life and especially in the Casa Pastores area.

The educational emphasis can be seen in the panels embedded directly in the wall, directed on the one hand to an adult audience and at the bottom of the same panels designed for children with specific vignettes of each panel’stheme.

Among the reproductions that the interpretation centeroffers is a shepherds’ refuge, a recreation of a cheese storeroom, in addition to indispensable elements such as cowbells, Canary knife (known as a naife) and loom.

Gofio Museum
In this museum we learn how gofio is manufactured, from its origin to its production through the elements that constitute the manufacturing machinery and discovering the different types of Canary mills.

Pérez Gil Mill
Its opening is located in the middle of the 20th century. In this mill the “maquila” was practiced, which was the benefit of the miller for cleaning, roasting and grinding the grain that the population brought to get their gofio. But they also received grain from abroad, specifically from Argentina that they used for sale.

The Gofio
Gofio is a cereal flour, theaboriginal people’s basic food, originally prepared with only barley and wheat. The aborigines used to toast the gofio in clay containers and crushed it with hand mills, made with porous basaltic stones.In the sixteenth century, maize was added, brought back from central Mexico. It is also found in Bolivia and Peru.Its quality depends on the aroma, the more or less roasted color, the balanced flavor and the pleasant texture on the palate.

La Fortaleza Interpretation Center
La Fortaleza is an archaeological site located in Santa Lucía. It constitutes a first-handhistorical document of as numerous and varied remains harken back to the presence of a great aboriginal town. Declared a cultural interest treasure, it is a heritage that, in addition to being studied and protected, must be made known to society as part of its past. 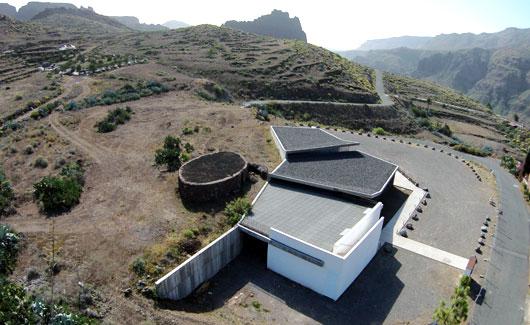 Nowadays, the name of Ansiteis inextricably linked to the name of La Fortaleza. This is mainly due to the fact that in the middle 20th century it was discovered that Santa Lucia figured asAnsite in the chronicles of the conquest. Indeed, the military defeat of the Canary aborigines at Ansite brought Gran Canariaunder the Crown of Castile.

Until the 1980s, this eventwas still commemorating, coming to be considered one of the most important festivals on the island. That is why this space is still so significant for the local population.

It has become a must see for visitors to the island, included in different tours and excursions programmed for both national and foreign tourism.

The Interpretation Center. Modern technology, such as hyperrealist scenographies present all that La Fortaleza offersin a single space. This type of presentation differs from other interpretation centers in argument and aesthetic. For example, a 65 “multi-touch screen enables visitors to discover the archaeological site more intimately.

Tibicena plans to carry out different tasks in La Fortaleza that focus on the management of the interpretation center and the archaeological site. These efforts should turn La Fortaleza’sinterpretation center into an island reference point regarding how to conceiveand manage a heritage space. By creating a meeting space, they will make this a living center in which visitors can enjoy diverse activities and in which the local population is involved.

DECEMBER: On December 13, the town celebrates the festivities in honor of its patron saint: Santa Lucía, declared of tourist interest, since in them it is possible to combine the religious festivity with the popular feeling. From that conjugation of originality and tradition are born days like the procession of the image of Saint Lucia on December 13, the coronation of ‘La Lucía’ with her Swedish namesake, the Pilgrim’s Day procession is held the following Sunday.

The Day of the Labrador is the festivity in honor of Our Lady of the Rosary, attracting many visitors. Currently, it is a pilgrimage in which thousands of participants (romeros) dressed in typical costumes meet: black hat, espadrilles, Canary knife, pumpkin full of concoction, wine, rum or water and typical food such as goat cheese, pork rinds, local sweets (mantecados), a gofio paste and fried sardines. On this day, carts, pulled by tractors or cattle, cross the streets of the town offering visitors products to taste.

OCTOBER 24 the celebrations in honor of San Rafael are celebrated in the area ofVecindario, that is declared a town celebration with other traditional acts including a large cattle fair.