Teror is a place of pilgrimage for inhabitants from across Gran Canaria, since the municipality welcomes in its Basilica the Virgin of the Pine, Patroness of the Diocese of the Canary Islands.

Therefore, visiting Teror should include its Basilica, located in the Plaza del Pino or main square. The church’s construction dates back to 1767, although subsequently it was restored several times, especially in the years 1968 and 1969. The current temple, with a gabled roof, has three naves with fourteen semicircular arches supported by columns and pilasters. Its facade opens on three doors, and there are two side entrances with stained glass windows that represent the Mysteries of the Rosary.

The Plaza de Teror is the nerve center of the town. From it you can see the typical balconies of Canary architecture that adorn much of the town. It is a wide square that, besides being the entrance to the Basilica, it is a place of passage in the historic old town. 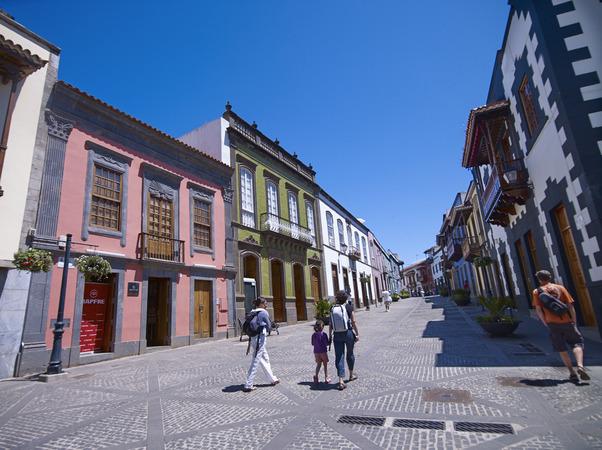 Teror’s historic old town boasts the most important heritage on this island, combining religious and social customs that attested by its streets, houses, public squares and monuments.

In April 1979, the surroundings of the Basilica were declared a Historic-Artistic Site, to preserve it and prevent its disappearance. The Historical Center is divided into the Barrio de Abajo (lower neighborhood), where the most important monuments are located, and the Barrio de Arriba (upper town), located on the mountain with panoramic views.

Within the mountainous system, Teror has places of special scenic charm, especially for its vegetation and sloping landscape. The Finca de Osorio estate is noteworthy and the protected area of Pino Santo, in addition to the Lomo de Las Julianas, in San Isidro, Lomo Gallego, in Arbejales, the Hoya Alta, visible in the back of the Basilica with its Cross of the Century, and ravines such as Madrelagua, Barranco del Pino or Barranco de Molineta. One of the most curious geological formations is located in the El Ojero neighborhood, where La Agujerada offers a touch of distinction to this mountainous terrain. 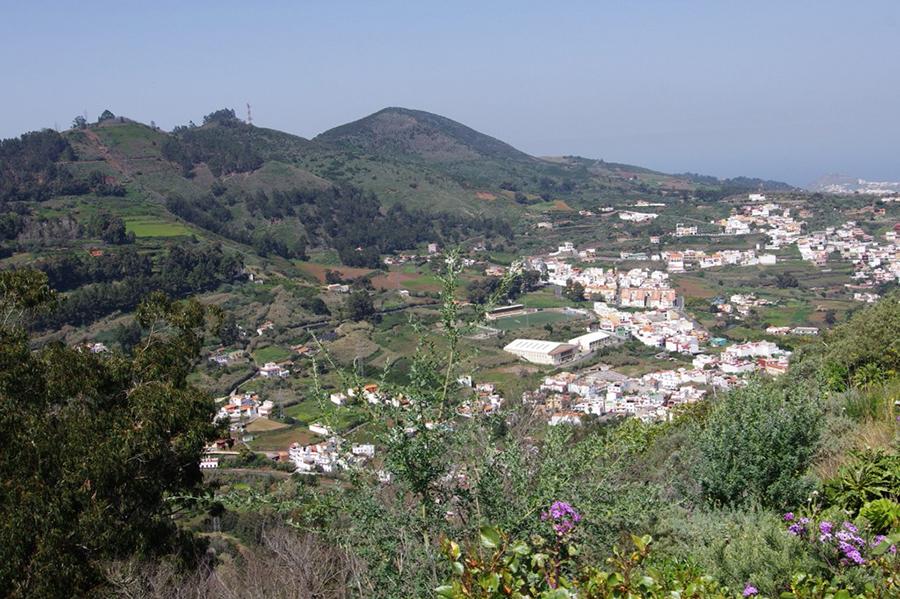 Mountain Springs
Teror has long been famous for its abundant and excellent waters and for the wealth of fountains and springs. There are many historical references that chronicle this fact in the past, such as the writings of Jose Viera y Clavijo. In the 18th century, this historianreckonedthere were almost two hundred fountains and springs. There are even those who defend that the place-name “Teror” means “place of waters”. Most have disappeared due to the uncontrolled well drilling alongside ravines in the past, and the decrease in rainfall in recent decades. But the town currently conserves some springs, such as the fountains or springs of San Isidro, Las Rosadas, El Borbullón or El Laurelar.

The spring known as Fuente Agria has brought Teror its greatest fame throughout history due to its excellent mineral content. It is located in the Barranco de Teror, less than a kilometer from the Historic District, and on the very road that leads from the sea to the summit. For centuries, the Fuente’s water has supplied water to Teror locals, and it has been one of the town’s main natural resources. There are still many Teror residents who come to take water with their bottles and jugs. However, there are also many who, for convenience, prefer to buy it bottled by the town company, which since 1982 manages directly the sale of the surplus water for the town’sbenefit. On several occasions the Fuente’s water has received important distinctions for its properties and in 1928 it was declared of Public Utility within the group of medicinal mineral waters. In 1916, the exterior of the fountain was restored with a stonework façade, which shows the spring as a natural monument.

Another historical water source is Santa María. This spring was located on the corner between Aldea Blanca Street and Santa María, and provided drinking water to old town residents for centuries. Currently the use of its waters is channeled and in the place near where the spring was, a plaque of recognition to how important has been place by the town’s residents.

In San Isidro, beside the San Bartolomé footpath to Teror, bordering the main road, is one of the many local springs, the fountain of San Isidro. At the beginning of the 20th century, its exterior was refurbished with a bench and a ceramic façade, a project which the neighbors themselves undertook.

This bridge is located on the Las Palmas-to-Terorroad, about two kilometers from the Historic Center. It is the oldest bridge that is preserved on the island of Gran Canaria.

The Puente del Molino de Abajo (Bridge of the Lower Mill), is well known because an old 17th century water mill is located next to it, was built between 1824 and 1828, financed by the local stewardship (Mayordomía del Pino)with neighborhoodcollaboration.

The construction of the bridge fostered communication between Terorand the island capitaland the districts of the municipality located to the other side of the channel of the Ravine of the Pine. The road to the capital would be built a few years later, between 1882 and 1895.

It is The mountainous formation of the municipality allows to have several natural viewpoints, from which beautiful landscapes can be seen. Although Teror has no coastline, some of these viewpoints show the remoteness of the sea. The best views are those that show us the historic center from above.

By car, we can access by the road that leads to Valleseco to the Mirador de Vuelta de losPájaros, about 800 m. above sea level, and from where you can see the entire Teror Valley. On clear days you can even see the coast. On the road to San Mateo, we can see another view of the Casco from the Mirador Lomo Verdugo. Another splendid vision of the urban center of Teror we have from the neighborhood of El Faro. If we follow this road to Arbejales, we find wonderful views with deep valleys.

Along the road from Las Palmas de Gran Canaria to Teror there are several viewpoints, located in the area of El Hornillo and Miraflor. From them there are very good views of the Barranco de Teror and the caves of Guanchía. If you dare to walk in the municipality, you can access on foot to other privileged viewpoints, such as the mountain of the Hoya Alta, the Pico de Osorio, the Pico de Pino Santo or the Montaña del Gallego.

The Finca de Osorio is perhaps the natural site par excellence of Teror. It is part of the mythical Rural Park of Doramas, which has been news since before the conquest, as it was one of the most important forests of the island.

Located about two kilometers from the Historic Center of Teror, the Osorio Farm occupies an area of 207 hectares, where roads, mountains, ravine, farmland and forest run. 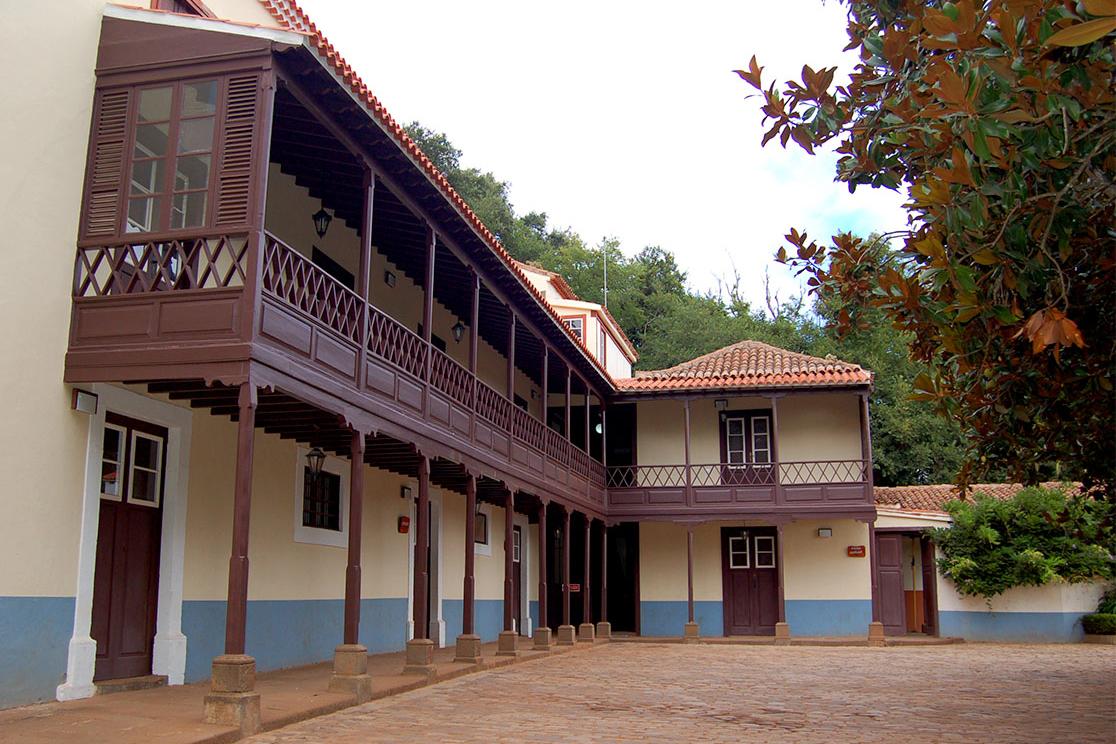 Traditionally these lands belonging to the mayorazgo of the Manrique de Lara were dedicated to ordinary crops (millet, wheat, potatoes and fruit trees), in addition to having a varied forest wealth. In its enclosure remains of laurisilva forests have been conserved and a wide extension is covered by castañeros.
Between the different units of the farm, and especially in the part of stewardship, trails that were planted with trees from Europe and South America, such as the ombú, the araucaria, the cork oak and the holm oak.

In the center of the farm is the main house, which occupies about 1,000 m2. The structure of this building is composed of an old building, located in the back with a wooden balcony, characteristic of the Canary rural house, and another more recent one of marked English colonial style built in the first half of the 19th century. To the westof the House thereis a beautiful romantic garden, which fuses withthe natural environment.

The estate also has some houses inhabited by those who farm the lands. A stable and sty where visitors can see some specimens of the black Canary pig, with lovely fountains and benches for taking a rest. Hikers and nature lovers can follow interesting itineraries in the surroundings and up to Pico de Osorio, the zenith.

Since 1981, the Finca de Osorio belongs to the Gran Canaria Island Council and since 1986 has a Nature Classroom, whose main objective is environmental education, with a hostel for organized groups.

Pino Santo Caldera
One of the most important geological formations is the volcanic Caldera at Pino Santo. This is part of the protected natural landscape. The volcanic cone had one of the most recent eruptions that form the area relief. 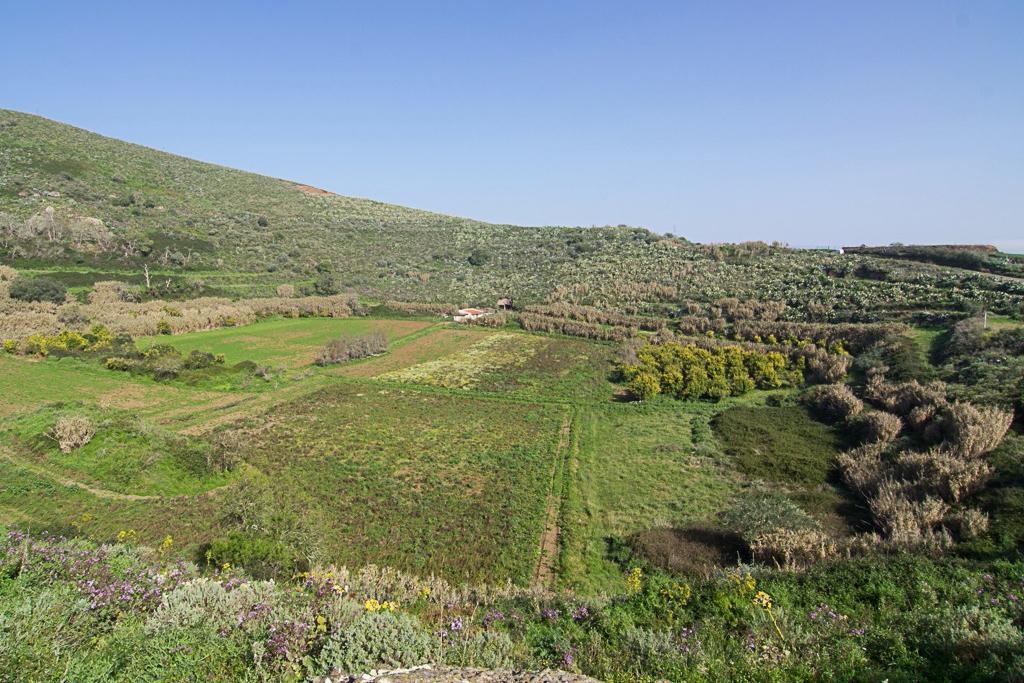 Every Sunday, the streets around the basilica host Teror’s bustling street market, one of the oldest of its kind on the island with two centuries of history.

The town’s geographical situation and, especially, the social impact of the cult of the Our Lady of the Pine (Virgen del Pino), have turned the Teror Sunday market throughout its history into a meeting point for thousands of people from all over to buy and sell, from the typical products of the area, such as sausages, black pudding, sweets, cheeses and bread, to other religious, textile and craft items. 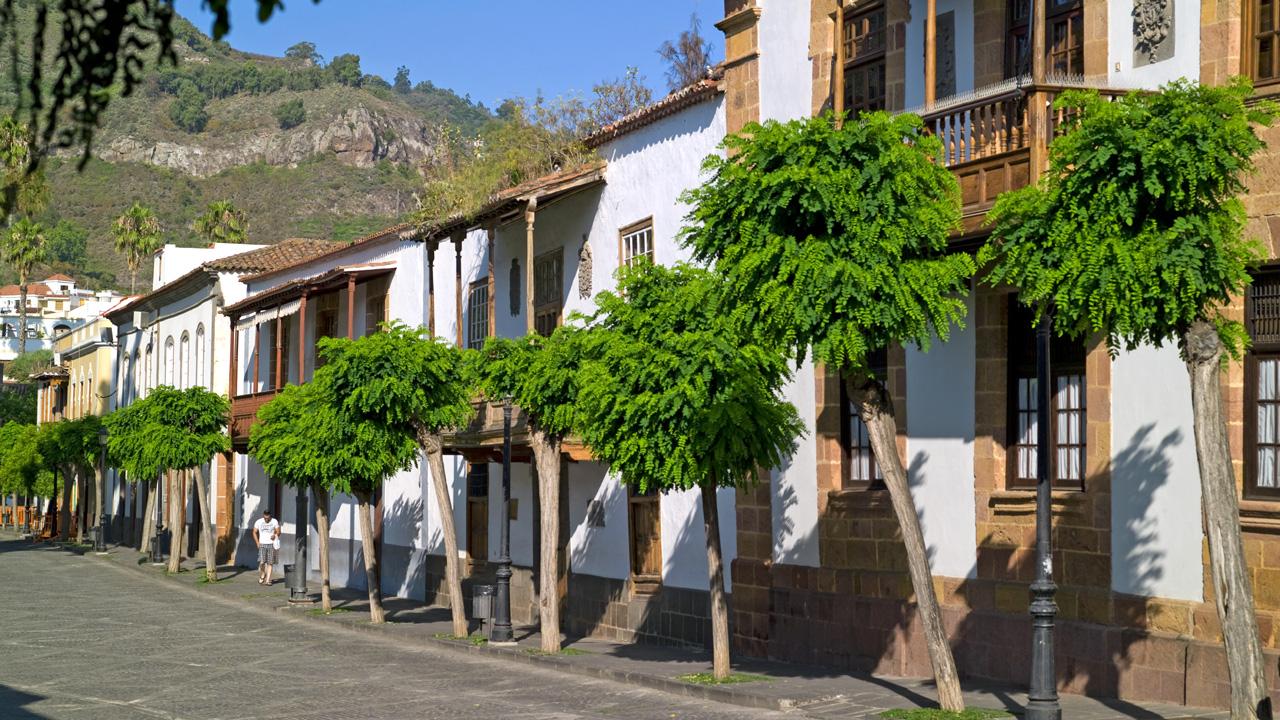 In 1932, Teror’s old town was declared a holiday center, so in addition its Sunday market – with some 140 stalls-, every Sunday the local shops open their doors and further enhance the commercial activity.

The Market of Teror forms part of its historical-commercial heritage, maintaining theoutdoors tradition around the Basilica, although it has also been adapted to modern times.

MAY Feast of San José and La Cruz
JUNE Feast of the Sacred Heart
JULIO AguaFestival.
SEPTEMBER Celebration of Our Lady of the Pine. This is the patron feast of the island of Gran Canaria.