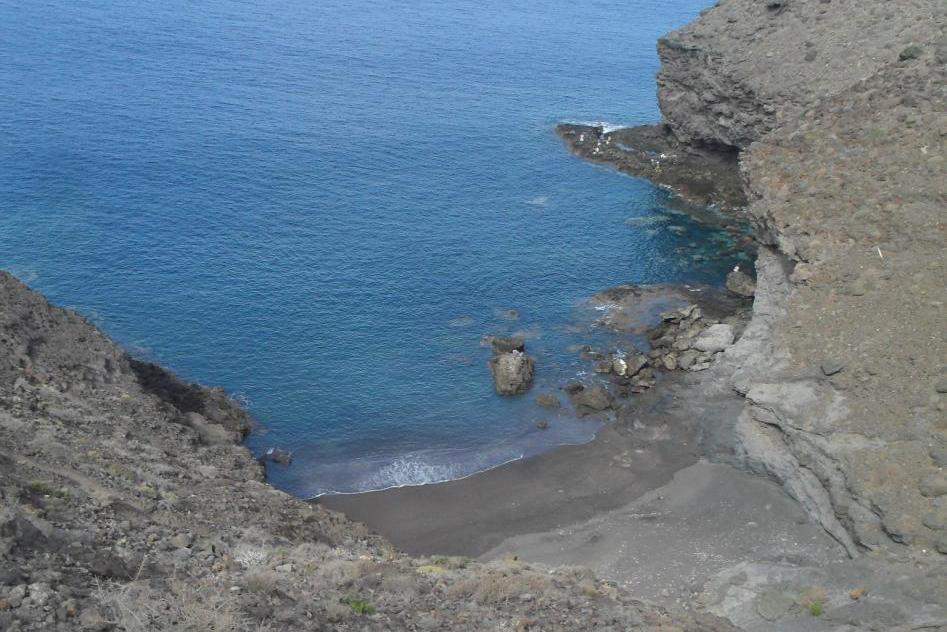 GLOBAL reserves the right to modify this information.. 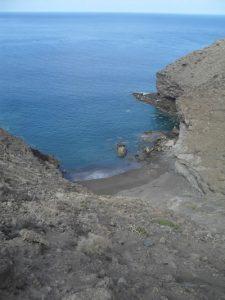 The level of this walk is defined as medium-easy, with a few demanding sections. It’s a short trip because the idea is to enjoy the journey, visit Rubén Díaz park and the surrounding area in the shade of the tamarisk plants (Tamarix canariensis), see the pool in El Charco and try one of the popular restaurants along the seafront.

The beach in El Puerto is a small, black sand cove, hidden away from civilisation and virtually unknown to many of the island’s inhabitants. This secluded spot was already known as Port Beach before the current dock in La Aldea was built. The beach was the island’s most important natural port until 1900.

Look for a pedestrian crossing in front of Restaurante Severo. From this point a steep sealed road (Calle Lomo del Carmen) will take you up to a hamlet and Los Caserones Archaeological Site. The site is on your right and is well worth a visit. It’s surrounded by a metal fence, as it has the status of Cultural Interest Site.

When the sealed road ends, a dirt track leads to the north. As it gently rises, you’ll have a view of the beach in La Aldea and a small pool known as El Charco, on your left.

Just 500 metres into this easy walk you’ll come to an old quarry on the edge of a cliff. The track heads right and this is where the section on El Perchel ravine starts. You’ll come to the first junction, where a path goes down to the left, but you need to keep going to the right. Soon afterwards you’ll come to the second junction, where you need to go left. If you want to take a look out over the pass of Degollada de Las Conchas and have a view of the entire slope of Andén Verde (a different perspective of the cliffs), go up to the right on a less well kept, stony path. You’ll be met by coastal and marine birds. The cliff face is dotted with hollows and provides a refuge and nesting area for seagulls and shearwaters. 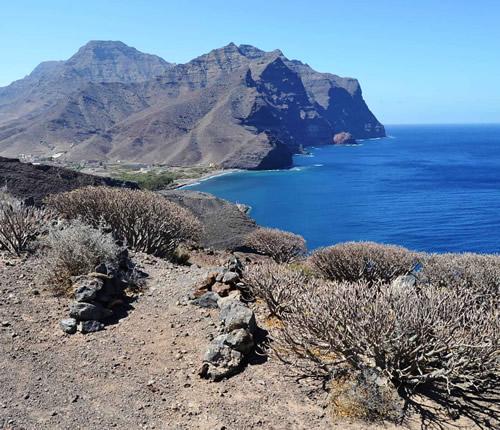 The walk is virtually flat in this part as it comes out of the ravine and looks out over a smaller ravine and provides lovely views. After 1.4 km you’ll come to the end of the track, in La Punta de La Aldea. Just before you come out, you’ll see an old dry stone construction on your right. This was a lookout post built during World War Two. The ruins have withstood the constant force of the wind. Take care to avoid walking close to the edge of the cliffs.

After enjoying this exceptional place, it’s time to head back. You could go back the same way or take a more adventurous, daring path. Where the dirt track ends, you’ll find the next reference to your left, where a pathway heading down is indicated by a small stone wall on each side of the entrance.

This old, stony path heads steeply down towards the beach of Playa de El Puerto. It’s exactly 1 km to the sand, but before you reach it, you’ll cross over some small ravines and zigzag your way up dusty ridges full of spurge plants (Euphorbia balsamifera). 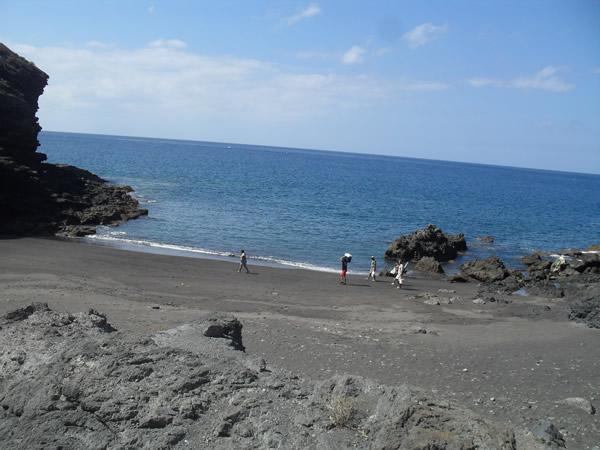 After you’ve had a rest on the sand (under one of the rocky overhangs, if you want some shade), keep going along the bottom of the ravine a few metres, heading upstream, until you come to the end of a dirt track on your right. After making your way up the track, you’ll come to the main path you were on at the beginning of the walk. Here you need to head right to go back to the old stone quarry.

This section is about 1 km long, including an ascent of 400 m to leave the ravine.

As soon as you go past the quarry, head towards the cliff face and look for a path that heads down to the fishing dock. This dirt and stone path is very slippery but it saves you going all the way back to the path you took at the beginning. It also gives you a chance to visit the dock and a small stony beach, where at low tide you can go through a tunnel to reach the end of the walk. 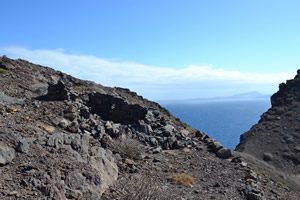 Military ruins
This was a lookout post during the Second World War, in use from 1940-1942. Soldiers were posted here when it was feared there would be an allied invasion.

Communications from this point with the port in Agaete and Montaña de La Atalaya was via heliograph, a mirror that reflects the sun’s rays and can be used to send messages in Morse Code. 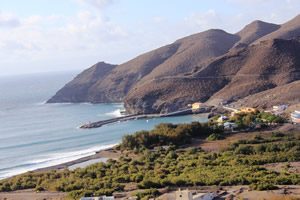 A large heritage park
La Aldea de San Nicolás is one of the oldest human settlements on Gran Canaria, based on carbon dating from studies carried out so far. It is also the most isolated town on Gran Canaria.

The area for this walk includes a number of historic elements such as Los Caserones archaeological area, El Charco de La Aldea ethnological site, the old rum distillery and the chapel in El Charco, said to have housed the earliest structure dedicated to the saint the area is named after (Saint Nicholas). These places are spread out over the area from the slopes of Montaña de Caserones to the southern end of the beach in La Aldea. 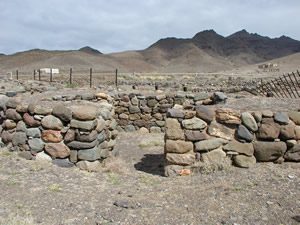 Early settlements in Los Caserones
Los Caserones is one of Gran Canaria’s most important archaeological sites and a paradigmatic example of models of human settlement in the pre-Hispanic period of the island. Scholars exploring the island’s past in the 19th century spoke of an enormous village formed by surface dwellings which, according to anthropologist Grau Bassas, formed a genuine “city” with a proto-urban structure: “Here you can appreciate the existence of a very numerous population; there you can see the constructions I’ve been referring to as animal pens, which are actually houses but larger in size, and which I estimate to number 800 to 1,000”.

Caserones also has funeral mounds, in a place known as Lomo de Caserones. In the 1980s a dig organised on one of them revealed the hierarchical order of the burials.

The earliest carbon dating from the settlement of Los Caserones is from around 60 AD, providing the earliest indications of human activity on the island.

Map of the walk 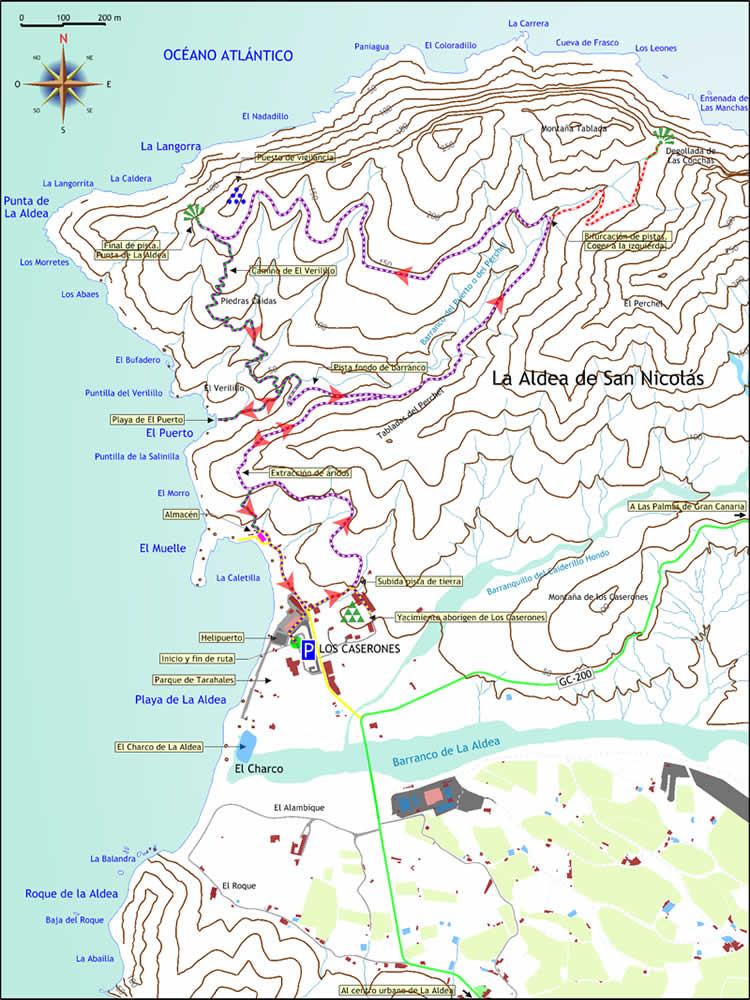 Profile of the walk 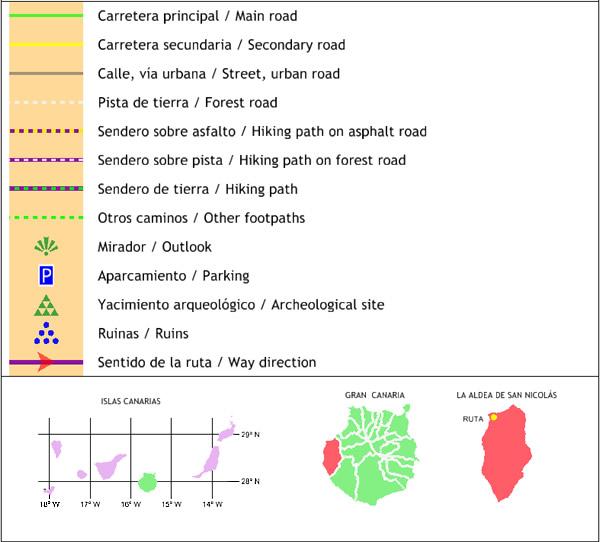