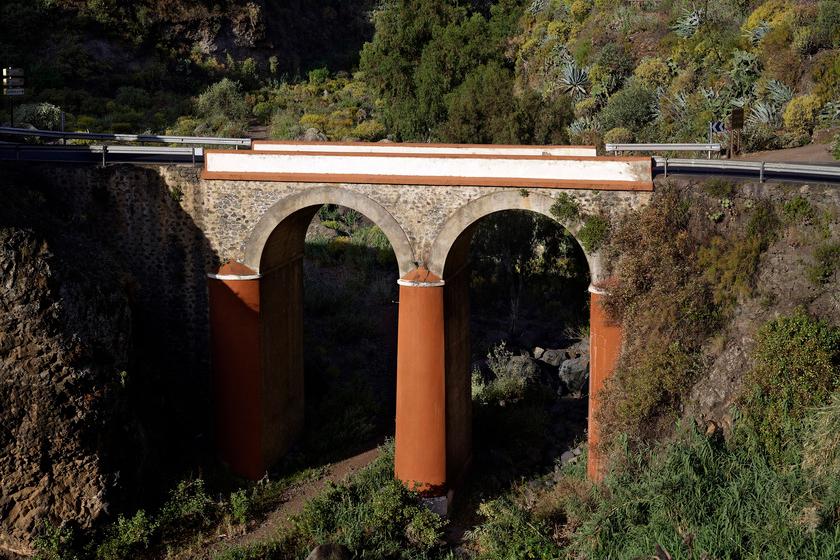 An impressive calderaformed by erosion, the Caldera de Tenteniguada, serves Valsequillo as a refuge in front of the Central Massif of Gran Canaria. This caldera, with sharp cliffs arranged in a semicircular shape and carved essentially in volcanic agglomerate and lavas of the ‘Roque Nublo’ cycle, collects considerable rainwater, being the tributary ravines of the Telde Basin that make up this structure and the escarpments stand out. In this spectacular caldera landscape there are some rocks of phonolytic composition (Roque Saucillo and the Roques de Tenteniguada).

At the summit, we find the volcanic caldera of Los Marteles which stands out for its scenic and geological importance. 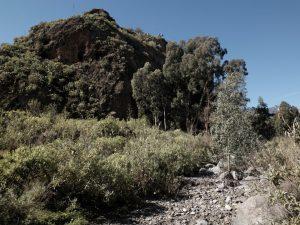 The middle stretch of the Telde Basin presents more closed-in ravines, such as the Barranco de San Miguel, due to the partial filling of more recent volcanic flows over the old channels. At present, these flows, sectioned by the new drainage network, form lava terraces which serve as farm land.

Valsequillois situated in a fertile valley with a height of around 600 meters above sea level and is surrounded by mountains that exceed 1600 meters. The volcanic nature of the island is evident in the rock formations that arise abruptly, as well as in the sinking of the soil of the calderas. The entire township is dotted with these surprising forms that the rock has shaped over millions of years.

The relatively humid climate and the abundance of springs cover the geography of Valsequillo with green, and with colorfulbursts of flower, which cover the area from December to June. 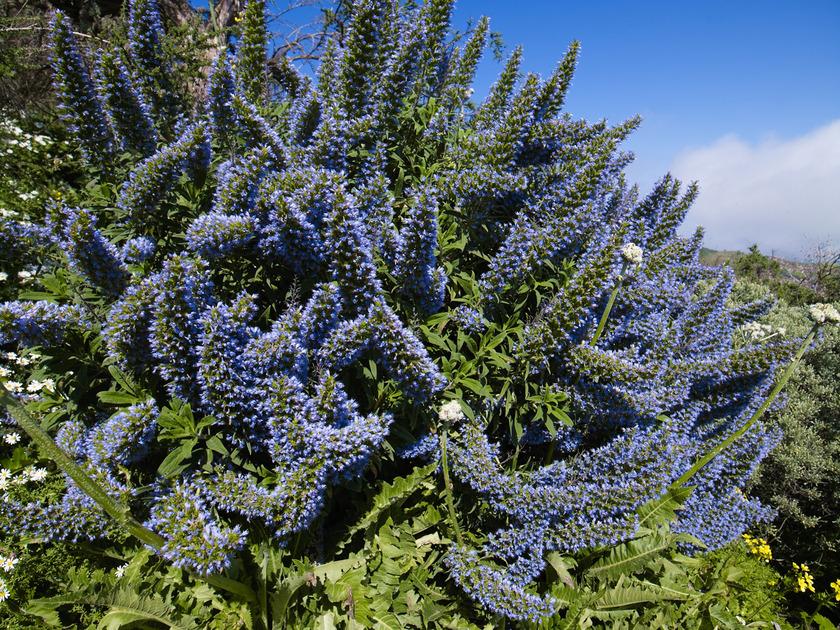 Hundreds of plant varieties, many endemic to the Canary Islands, exclusive to the island and even to the area. Among them the one that most attracts the attention of the visitor is perhaps the blue tajinaste, whose color contrasts with the yellow of the bejeques, the codesos and the rushes, the white of the brooms, and the flowers of the fruit trees, especially in February, when the almond trees bloom white and pink flowers. Among the vegetation, birds, lizards, amphibians, small mammals and many invertebratesflourish. Overhead the slow flight of raptors like the hawk and the kestrel, always accompany the visitor to the summits and often appear between orchards and dwellings.

And all this, geology, flora and fauna can be appreciated along trails that anyone in good shapecan traverse. There are other paths, however, that include the most demanding climbs and do not disappoint the expert trekker.

Thus, Valsequillo is a paradise for hiking and for other sports such as mountain races, of which several are held during the year, cycling, climbing, horseback riding and all kinds of activities in nature.

Valsequillo is among the best places to study Gran Canaria’sethnographic heritage. Here we find abundant remnants of how the Canarypeople were able to adapt to environmental conditions, modifying it to ensure their survival, creating at the same time a rich cultural heritage of their own.

Aboriginal heritage survives in this even today in harmony with the contributions of the new settlers.An attentive look will discover in every corner of the town small masterpieces, some still in use, others abandoned, that tell us a way of life that local elders still remember and can recount.

Valsequillo was part of the Guanartemato of Telde, one of the two kingdoms in which Gran Canaria was divided at the time of the Conquest. There are about twenty archaeological sites of the ancient Canary people in the municipality, mainly groupings of caves almost all of them reused in historical times. 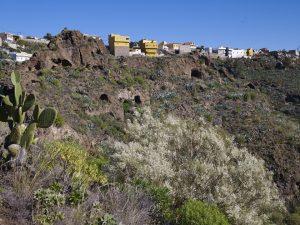 Among them, the pre-Hispanic caves located in the west side of Barranco de San Miguel are noteworthy. Many of them are reused as part of current housing, as in the case of Tecén or Los Llanetes neighborhoods. But it is in the latter, where the largest number of caves that retain their original state is concentrated, highlighting by its spectacular El Roque, a small rocky fortress located between the ravines of San Miguel and Los Mocanes. 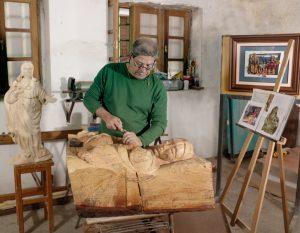 The climatehas created habitats for certain plant species which has led to the development of different types of crafts, such as wool spinning; the making of fabrics with the loom; the works of cane, wicker, cloth, iron, wood, rye and palm and even fireworks. Although, in addition, small centers of pottery and stonework are also noteworthy. All of them give the town a unique personality, where tradition and culture are closely linked.

Alternating with these works of traditional crafts, it is worth highlighting the “new craftsmanship” that has been gaining importance in the municipality, such as toys and carpentry.

Thus, given the rural environment that surrounds Valsequillo and the diversity of forms of its crafts, we could deduce that this work have sprung from a real need in the community. Hence, the products we find are related to people’s daily life, highlighting those that are linked to farming and livestock (baskets, plows, cheese, packs and sacks) and those of human use (tablecloths, jackets, blankets, dresses and brooms).